Conquest of the New World- Deluxe Edition is currently download only.

Conquest of the New World- Deluxe Edition is download only, because file size is 54 MB.

About Conquest of the New World- Deluxe Edition

Conquest of The New World: Deluxe Edition Conquest of the New World: Deluxe Edition is a much-improved update to Interplay's highly underrated game of colonizing the American continent. GameSpot's T. Liam McDonald posted an excellent review that should convince everyone of how great the game is: "If the release of Conquest of the New World Deluxe does nothing else, it should reacquaint people with a sadly neglected gem of historical strategy gaming. A far more entertaining experience than Sid Meier's Colonization, Conquest puts you in the role of French, Dutch, English, Spanish, or Portuguese explorers in a "new world," with an option to play as Natives as well. In the grand old tradition of conquest games, you begin by landing on an unexplored piece of land, and must push back the black veil over the map by sending your explorers, settlers, and soldiers fanning out over the countryside. The landscapes these explorers will find are some of the best rendered in any such game to date, with mountains, rivers, valleys, and plains all done in amazing detail and a zoom feature that can take you right into the dirt. An especially fun twist is the option of naming any new geographical features you may find (mountains, rivers) and getting credit (in the form of points) for their discovery. Also found in the countryside are various natural resources such as gold and metal, with the Deluxe edition containing new productivity-boosting items like gems, jade, mines, and medicinal herbs. The point is to settle a good region that can support crops, colony expansion, mining, and possibly add a production bonus through proximity to special resources. This settlement will grow over the game as you build farms, mills, smiths, churches, houses, and other structures to increase your population, income, and the overall success of the colony. One particularly fascinating element of Conquest is the ability to zoom right into these settlements and watch them up close, playing with various levels of productivity, moving people from one job to another, and generally playing god with their little lives. Of course, you'll need to protect these settlements and create a military force to expand and conquer the rest of the continent. To do this you can build infantry, calvary, and artillery, attach them to leaders, and send them out across the country side spoiling for a fight. These battles are done in short, novel combat sequences that resemble a cross between miniature wargames and chess. The soldiers appear on a small grid, and fast, turn-based sequences let you move across the grid and attack the enemy - choosing exactly how you group your men and where they attack. It's simple to understand and adds a good combat element without upsetting the general pacing of the game. The general pacing, however, is the big problem with this game. There is a mid-game sag as your explorers fan out and get the measure of the new land. The structure of the financial and building systems makes it hard to maintain two good settlements during this exploration time, and too often turn after turn passes as you simply explore and build up the colony. A new trade element in the Deluxe edition reduces this problem a bit, since it allows you to form trade alliances with other units on the map and have more sophisticated control over the flow of goods between colonies. But it still takes a long time to build a good force and starting attacking. Other new features in the Deluxe edition are expanded diplomacy, new bonuses depending on what nationality you play (France has improved relations with natives, Holland gets extra money from gold, as so on), customizable world size, a scenario builder, and advanced game scenarios that set specific tasks. While you can set parameters for customs maps (the percentage of mountains, rivers, flatlands), you cannot create custom maps from scratch; all you get do is place forces and structures on randomly generated landscapes. If you already own the original, the Deluxe Edition doesn't offer a substantial enough enhancement to warrant purchasing it. But if you missed Conquest the first time around, don't miss it now." Overall, an excellent, unique strategy game that should appeal to fans of Colonization. 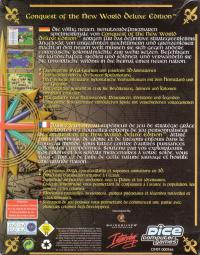 Enter the code to download Conquest of the New World- Deluxe Edition.

Why not be the first to post a comment about Conquest of the New World- Deluxe Edition?

No comments have been posted about Conquest of the New World- Deluxe Edition.