Review 1: I must admit that I wasn’t aware of any other simulation from the mid 90’s that was that close to Dynamix’s Red Baron game. Dawn Patrol offers many of the same features, graphics and overall gameplay as seen in Red Baron. Unlike other war flight simulation you play the game as different scenarios instead of using the same pilot over and over in each mission. You are also offered to play as the Germans or Allies at certain missions. While most of the features in Dawn Patrol there are a few bad issues regarding the control of your plane which just makes the game hard and sometimes even unpredictable but if you can live with that (and I'm sure you can do that, at least I could) then Dawn Patrol is a good candidate for the next game you are going to play. There are different planed included in the game as well as different aircrafts and other military units. The different between them are not big though and the developers could have used a bit more time on these things. Overall Dawn Patrol is a very nice war simulation game taking place in the much more interesting World War I (compared to World War II – at least in my opinion) and Dawn Patrol is very high rated on my list only beating by games like Red Baron and the Amiga game Wings from Cinemaware.

Review 2: Having mastered World War 2 flight sims genre with games like Overlord, which was one of the finest flight sims ever made for the Amiga, Rowan Software turned their attention to WW1 air combat with Dawn Patrol. But how do they compare against the phenomenal Red Baron from Dynamix or MicroProse's Knights of The Skies? Very damn well, in fact. The presentation and game structure of Dawn Patrol is quite unique. Instead of following the career of a single pilot, the game revolves around a sort of interactive "storybook", which describes famous air combats during WW1 and then gives player a chance to relive them through the flight sim part. Some missions even allow the player to choose the side, which provides two alternate ways to fly the same mission. The graphics are very good, especially in SVGA mode. Aircrafts are nicely rendered, although the landscape is a bit sparse. This is not a huge downside, though, considering that most of the action take place in the blue yonder (e.g. dogfights). Sound is adequate, although some effects such as gun strafing could be better sampled, and the moody music might get tiresome. The fight model of the plane is probably the game's weakest spot, as there seems to be no big differences between various aircrafts, and the planes are a bit too fiddly (although that may be due to problems with my joystick). Even with these faults, though, Dawn Patrol is an outstanding flight sim that is more "light-weighted" than Rowan's other sims, given some slack in realism. The game's "storybook approach" is a welcome departure from the more typical career-based structure of most other sims. Hardened flight sim fans might want something more serious, but for casual armchair pilots or beginners, Dawn Patrol provides an educational and enjoyable experience. Recommended! Note: the download here is single-player version which is out of print. For a head-to-head modem version, check out Dawn Patrol: Head to Head also on this site. 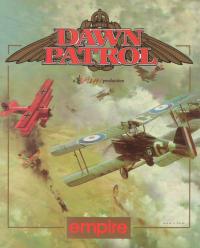 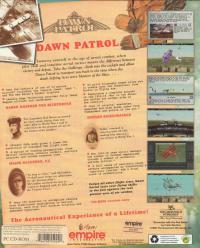 No comments have been posted about Dawn Patrol.