Review 1: Yet another SSI strategy game that didn't really make it (note that SSI haven't made great strategy games) but Fantasy Empires is just too unique in it's interface and a bit difficult to learn and that might have been the reason why the game never really "got big". You can choose to play either a scenario or a full campaign and as you may have guessed the game takes place in a fantasy world. The best thing in the game is the mixture of strategy based and action based game play which changes everytime you enter a battle.

Review 2: Definitely one of the best fantasy games ever made, Fantasy Empires is an incredibly addictive fantasy strategy game that combines real-time tactical combat, numerous strategic options, and brilliant graphics and sound effects into an unforgettable gaming experience. Set in the D&D world of Mystara, Fantasy Empires is similar to SSG's Warlords and SSI's earlier Sword of Aragon. Combat is, however, real-time; although the arcade segment will be fairly acceptable to most wargamers who dislike frenetic action games. You begin by creating your character, as well as up to 4 opponents. Gameplay is split between the strategic map, where you can cast spells, select diplomacy actions, build several structures to train different unit types (similar to Master of Magic), and the close-up tactical view screen where you can see and control your armies in battle. You can also use spys to wreck havoc on your enemies. One of the best features of the game is the "Dungeon Master" -- a computer-controlled wizard who will give you advice and general remarks during the game, in a surprisingly well-done digitalized voice. As in RPGs, your characters and units grow in experience as you progress through the campaign, earning you access to more powerful spells and buildings. Overall, Fantasy Empires is simply a must-play for all fantasy wargamers. My only gripe is that because you must conquer EVERY territory to win the game, later stages can become a long, boring waiting game of attrition. 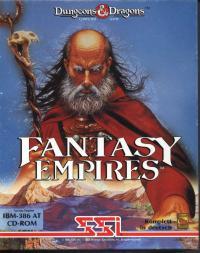 No comments have been posted about Fantasy Empires.