Review 1: Beat 'em up! Not much to say about this game. You travel to different planets, battling many different opponents in 1 on 1 combat. Each character has some unique special tricks, and there are eight different characters to choose from. You'll have to battle a nasty guy at the end of the single-player game. Options for two-player game.

Review 2: FX Fighter is an exciting 3d fighting game, similar to Virtua Fighter. The story is this - aliens from around the universe have gathered to battle for the title of best fighter in the universe. The game's excellent graphics and smooth animations are enjoyable features. One thing I disliked about this game was the lack of character personality. The characters in the game are all quite original (i.e. a preying mantis, a molten lava creature, etc.), but they lack individuality. Another thing I didn't care for was how dark the game environment is - and this cannot be altered. However, the graphics can be sharpened or dulled depending on what type of computer you have, which is a helpful option.

Effect: Give double impact on opponent
When:During the game
How:Type 666 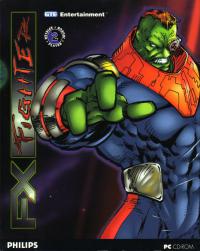 No comments have been posted about FX Fighter.