Despite being one of UK’s most popular “cult” comic books, Judge Dredd never fared well when licensed to other media—the movie starring Sylvester Stallone as the beefy judge is one of his worst, and the 1998 Activision game isn’t much better. Unfortunately, Acclaim’s Judge Dredd the game is no exception to this norm. For those who are unfamiliar with the comic book hero, Judge Dredd is one of future Earth’s law enforcement officials who are part Judge Wapner, part Wyatt Earp, capable of meting out justice (and executions) in a draconian manner without bothering with Miranda rights. The game closely follows the movie’s plot: as Judge Dredd, your goal is to fight your way through a horde of android troopers to finally defeat a megaboss that just happens to be a former judge himself. All the action takes place from first-person perspective, similar to SEGA’s popular Virtua Cop. Unfortunately, the similarity ends here. One feature that I really liked about Virtua Cop was the way in which the game would build suspense by placing you in a room, pausing the action for a moment, and then unleashing an army of criminals from all corners of the room. Not so in this game. Judge Dredd places the character on a continuously moving track, with enemies coming from everywhere like an assembly line. If you do not hit them the first time, no worries—they will simply disappear behind you. Apparently it is impossible to be shot in the back in this game, something that real policemen would find amusing. The graphics are quite good, but could have been much better given the game’s recent age. The game promises a "destructive world", meaning that there are objects on the screen that can be shot and destroyed for special power-up bonuses. What is really lame about this is the fact that there is constantly so much clutter on the screen, from enemies to wall decorations, that you really cannot figure out what you are supposed to shoot. This is especially so when the enemies themselves tend to look like the background graphics. So, you decide to play this game, and even with all of the crap flying around and enemies coming out of the woodwork, you still manage to shoot relatively on target and pass the first level. The second level gets a bit better, but it’s just more of the same. The last level requires you to shoot various flying things in some sort of hangar. I finished the game in less than an hour—not much time at all, especially since I’m not even good at this kind of games. Action game veterans will probably be able to finish the game in half an hour, or even less. What is really disappointing about Judge Dredd the game is that instead of creating something original or well designed, the designers just took the easy route, hoping that the novelty of the genre and the luster of its license would carry the game. Essentially, there's too much to see, too much to shoot at, too much repetition, and too little substance and play value. A Real Dog without a doubt. 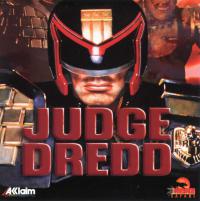 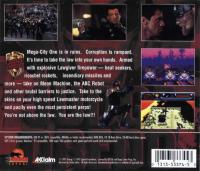 No comments have been posted about Judge Dredd.

Invasion of the M...