Review 1: "You are Nick Vrenna. It is the year 2009. You have been falsely incarcerated inside a high security underground prison where illegal genetic experiments are taking place. Alan Blake, the head research scientist, has isolated the specific gene which causes violence and aggression in humans. This genetic sequence, called 'Abuse', is highly infectious, causing horrific transformations and grotesque side-effects. You are the only person to show immunity to it." Abuse changed the platform games forever. It's unique player control and mouse aiming makes this game a true masterpiece filled with action. It really does feature some things never seen before. That mouse aiming while running through the hallways gives you a vital advantage over your enemies. The game is taking place inside the "prison" facility in which the mentioned experiments were taking place. Your goal is pretty simple - escape. On your way out of the complex you will have to fight with highly mutated humans who look like Aliens (from the movie with the same name and Sigourney Weaver in the main role) and are very dangerous. Good thing that you're pretty well armed as well and on your way out you will find even better weapons. Abuse's interface might surprise you in the beginning but once you get accustomed it will not be too hard. This game is highly recommended to everyone, both action game players and the ones that prefer adventures. Trust me, you will not be disappointed.

Review 2: Abuse is a slick arcade platform, released in 1995. The graphics are reasonably good, but the gameplay is what makes this the popular game it was, when it was realeased. Battling your way through a futuristic complex, filled with aliens and robotic enemies, your task is to penetrate the core, destroying anything which lies in your path. You can collect powerups which increase your armor and weaponry, such as rockets, lasers and grenades. All in all, quite a fun and nicely written game all though you can find many similar games of higher quality.

Review 3: A masterpiece! Basically just a sidescrolling platform shooter - but it's technically very advanced (for 95) - this shows where the genre would have gone if it would not have been eradicated by the flood of 3D shooters. Controlling a Turricanlike one-man-army you destroy anything that stands in your way while you proceed further into this futuristic building filled to the brim with aliens, robots and automatic laser guns. The story isn't anything new, the graphics are great though and the controls... yes, the controls are great! With the keyboard you control the movement of your hero while you use the mouse to shoot and select weapons. This allows running into one direction while shooting at the monsters that are chasing you - brilliant! It might take a while to get used to using your left hand for the movement, but after a surprisingly short time I didn't even notice anymore. If you liked Turrican you will love this one. It's the next step in the evolution of a now dead genre.

Review 4: Undoubtedly the DOOM of platform games, the only thing that's different between this underrated gem and that highly regarded classic is the Abuse's lack of first-person perspective. Despite a cliche plot (kill-all-aliens), everything else is spectacular: smooth animations, cool weapons and enemies, some thoughtful puzzles beyond flip-the-switch types, and the superbly *dark* atmosphere. It even includes a full-featured level editor/creator that allows you to set even custom AI of the monsters and how objects behave. A must-have!

Review 5: Here I go, this is one of my all time favourites, the game that is the abandonware's answer to the current day 'alien vs. predator'. This action packed game is something from the future, stuck in the past; what I mean from this is that it was made back in 1995, but feels like something that shouldn't have been made until a few years later. The graphics are crisp clear, with great sound effects, and perfect game play. If I had to go to space tomorrow and could only take 10 games with me, this would defiantly be one of them! Its the kind of game in which if you don't have a graphics card or perfectly modern sound card, you can still sit back and play without trouble. Abuse is famously quoted as "a side scroller with a twist", and that’s exactly what it is. You play an alien fighting throughout the various levels with a nice selection of guns at your dispense. Your aim is to, like many other games reach the end of each stage - alive, whilst battling various aliens and everything else non-human. Although Abuse is listed as an action game, which it is, it is also a platform game, and a great one at that. The key features which make this game awesome and the reason I say its ahead of its time is because it has the Max Payne/Unreal Tournament feature of playing with the mouse. Yep, you can use the keyboard and mouse simultaneously, both to move and to aim and fire. This game is a MUST if you are into action-packed game play!

Effect: Edit God Mode
When:Outside the game
How:Use the command line parameter -edit to get into the game in Edit God mode. Hit SHIFT + Z and then TAB to start the game 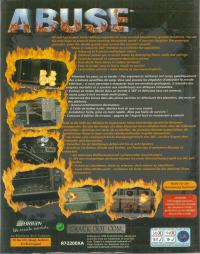 No comments have been posted about Abuse.