Review 1: It's Halloween night. Your uncle has just finished his great new invention, the wormhole machine, and he wants to test it. But as soon as your uncle has switched the machine on, lightning strikes it. It opens a wormhole in a galaxy far far away and of course a giant spaceship flies through. They want to get back on their home planet so they kidnap your uncle because they believe he can send them back. Your mission is to save your uncle and the world. Cliché, wuzzda? The plot might be crappy but the game itself is great.

Review 2: Alien Incident is a fun, unassuming science fiction adventure that is great for young adventurers due to its family-oriented plot and easy puzzles. You play the role of a teenager called Benjamin who's visiting his uncle's house at Halloween. His uncle, a home-grown scientist, attempts to activate his latest invention, the wormhole spawner. Amazingly enough, it works and rips open a wormhole to another galaxy, transporting an alien spacecraft to Earth. The aliens kidnap your uncle and, surprisingly, your mission is to rescue him (and the world, but you knew that already). Strategy Plus sums up the game's appeal quite nicely as follows: "GameTek's Alien Incident must have been developed with the fledgling gamer in mind, and in that sense seems to be going in the right direction. Along with its clever animation and interesting storyline, it reinforces to the new or younger gamer the idea that fun, challenging gameplay doesn't have to include violence.... The tone of the game is well established very early and nicely maintained throughout. You cannot hope to rescue your uncle and thwart the plans of the aliens without some obstacles, so there is, of course, the usual gathering and intelligent deployment of assorted objects for puzzle. On the down side, Alien Incident seems to crash and lock up every now and then. But even when this happens, the game has an automatic recovery system. For instance, if the game crashes for whatever reason, the next time you start the game you'll find it has performed a "disaster save," and asks if you want to start where you left off. Seems like they may have been expecting a crash or two, eh? Parents will want to add this game to their shopping lists, as the story is fun and easy to follow and the interface intuitive enough to pick up with little or no coaching. Recommended primarily as family fare, this non-violent diversion should prove entertaining to Mom and Pop, as well as Billy and Sue Ellen… assuming they can withstand the occasional technical problems." 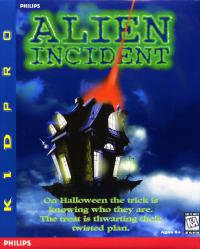 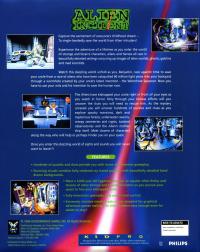 No comments have been posted about Alien Incident.