Alien Rampage is a fun 2D horizontal platformer from indie developer Inner Circle Creations, who bought rights to the game (originally titled Ravager) from Apogee, finished it, and got Softdisk to publish it as shareware. More or less a "DOOM 2D" kind of game with a smattering of physical puzzles (e.g. shoot locks to open doors), the game unfortunately got much too little attention from gaming press and gamers. Strategy Plus summarizes the game's quality quite succinctly in their review: "Though not graphically impressive, Alien Rampage is a side scrolling shooter heavy on gory violence and mindless action. Take control of an alien (who is more than vaguely reminiscent of the Predator) who has a lust for revenge so strong that not even death can stop him. He gets killed, he simply rises from the dirt again at the last save marker. There's some sort of story for why the ugly little guy is so determined, but it hardly matters. The character graphics are pretty large as this sort of game goes (indeed, it makes Hunter Hunted look like midget wrestling), and everything moves along fairly well. There are some neat features (not new mind you, but neat) here. The alien can climb vines, manipulate switches and hang from ledges. There are some puzzle aspects to the game, and rendered boss monsters at the end of each world. But mainly, the levels in this game (over 20 of them) border on huge. It's not unthinkable for one level to take almost an hour to complete. Which brings up an annoying aspect of the game's design: it only saves the game after the completion of a level, the save markers only work while you are playing. Still, this is solid, classic gaming, with fierce action, fun and diverse levels, and good control." 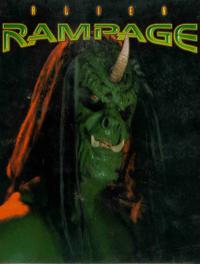 No comments have been posted about Alien Rampage.