As an agent of the NSRT (National Satellite Resources Technology), you happen to be the first witness of the sad fate suffered by all members of an archeological expedition sent to uncover the fabled Lost City of Chak. Apparently, the whole expedition was murdered by a tribe of cannibals. And guess what? Now YOU are the one who has to travel to the Amazon to uncover the mystery... And that's only the beginning of your problems. Mysterious people are trying to kill you. Professor Benekker, an expert on the Amazon who was supposed to accompany you, turns up dead. As a replacement, you'll end up with his highly-intelligent (but highly-obnoxious) parrot, Paco. Be prepared to face wild animals, savage tribes, guerillos, and even a live volcano, as you make your way to the remnants of the expedition and the Lost City. Contrary to what many people think, this game isn't based on any actual story by Michael Crichton. It's an original game on which Mr. Crichton worked even before Telarium contacted him. If you compare it to similar games from the same period, Amazon stands out with its "story-driven" plot, which somewhat compensates for the CGA graphics and Telarium's ackward parser. 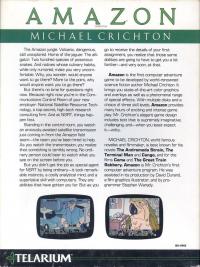 No comments have been posted about Amazon.