Review 1: Archon Ultra is a significantly enhanced version of the original classic Archon by Electronic Arts. In it, two-players battle each other in a game that resembles chess in visual appearance, but with many RPG-style features and requirement of reflexes thrown in. The gameplay itself, like Archon, is similar to chess in many ways. A board with alternating black and white squares is set up in which each side (light and dark) takes turns moving a single character. Each character has a certain amount of squares to which it can transport, and some characters can fly over others instead of being forced to walk around them. Unlike chess, the characters found in the light and dark sides are completely separate from each other. The players on the light side represent "good" creatures (eg Phoenix, Djinni, "good and noble" Wizard) while the dark side is composed of evil beings (eg Dragon, Shapeshifter, Goblin, and of course the "evil and deceitful" Sorceress). When a character from one side lands on a square occupied by a character from the opposing side, they both will enter a large arena and fight. An interesting variation (which was present in the original Archon) is that some of the colors on the game board will change color slowly, alternating between white and black as the game progresses. If a battle is fought on a black piece, a dark and fire-pervaded landscape will serve as the arena, and the evil character will be automatically granted extra hit points. If a conflict ensues on a white piece, a peaceful and serene forest will be the battleground, where the good character will enjoy the same advantage. In addition to more gameplay options than the original and excellent VGA graphics, Archon Ultra also offers modem pla, which is very smooth even at 2400 baud. It is a shame that SSI did not convert Archon II to PC version and include it with Archon Ultra, but that's a minor point considering all the significant enhancements in this version. While Archon Ultra is more of an evolution rather than a revolution that its predecessor was, it manages to retain all of the elements that made Archon a masterpiece, and improve on them.

Review 2: Archon Ultra is a face-lift on Archon, an old chess-style action game (yes you read right) which is reviewed elsewhere on this website. For those who haven't played Archon (and I imagine there are many, the game was released in 1984), the players take turns moving their pseudo-chess pieces around the board. When the pieces meet, the winner is not determined by who moved into who, or the roll of the simulated dice, but by actually entering a 2D combat between the two pieces. Don't be fooled, this is not Battle Chess. You control the pieces as they fight, making success a mixture of strategy (knowing which pieces work well against which) and reflexes (even a poor strategist could win through sheer wit of the keyboard). The end result is quite fun. Archon was one of those rare games that attempted to cross-breed two genres and came out with something satisfying to fans of both genres. A strategist will not be annoyed at being repeatedly beaten by an action player, as there are strong differences in the power levels of the different pieces (a "pawn" is not going to beat a "queen"), and the chessboards sports certain key positions which give the side that controls them an advantage in combat. Further, similarly, an action fan will not find him beaten helplessly by superior planning; as the damage taken by each piece carries on throughout the game. Therefore even if the opponents "queen" takes your weaker pieces unawares, you can still wear the queen down with each piece. Despite the obvious attempt to reach balance, the game does, in my opinion, favour the action player as the key strategic element of chess is eliminated, namely positioning your pieces so that you are the attacker and not the defender in any engagement. Imagine chess where it makes no difference whether your "rook" attacks your opponents "knight", or vice versa. The designers have obviously attempted to compensate for this by making the squares favour either the black or the white pieces in combat, meaning there is some value in picking the location of your battles, but this doesn't fully replace the strategy element. Still, certainly a fun game to play, especially in two player mode. A wide variety of pieces (the black and white sides each have different creatures) makes for a lot of variation within the game. My only gripe is that when two identical pieces face off (e.g. pawn and pawn) the battle is somewhat dull, and sometimes becomes ridiculously long. Ideally some form of variation would have been good here, but a timer on the battles would have achieved the same end. 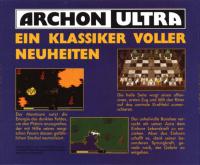 No comments have been posted about Archon Ultra.