About Back to Baghdad

was the first and only release from Military Simulations, a small US-based outfit that later modified the game's source code for use with the US Air Force's actual F-16 simulator. One of the world's first truly "hard core" simulator, Back to Baghdad unfortunately is not up to the standard that its lofty $69 price tag may suggest. Veteran gamer T. Liam McDonald says it all in his review: "If a game does one or two things very well, and other things not so well, is that game a success or a failure? The answer depends on how much importance you place on its strengths and weaknesses. Back to Baghdad has already been hyped as the new standard in flight sim realism and accuracy. Of course we've heard this before, and rarely is a title everything it's supposed to be. Su-27, after upgrade patches, has achieved the state-of-the-art. Longbow is a stunning piece of work in many respects, but fails to provide the crucial head-to-head play. Hind does everything very well, and EF2000 (again, after upgrade patches) is a fine piece of work. Back to Baghdad impresses in a few important areas, beats all the competition in one element, and sadly disappoints the rest of the time. MSI boasts that they are creating high-end flight sims for the hard-core hobbyist, and much of the product bears this out. It is low-chrome, with a token video introduction that is so grainy and badly executed it should have just been left out. (The mondo-hokey Back to Baghdad theme song doesn't help.) With a few short clicks, you're inside the heart of a brand new F-16 simulator, on the shelves while Interactive Magic and Spectrum-HoloByte are still at work on theirs. There's some impressive wiring under the hood, with 40 missions and instant action modes in the skies over the Gulf. The premise has Saddam back and threatening the world with nukes, and it's your job to stop him cold. Missions are dominated by the air-to-air encounters for which the Falcon was made, but there are ground strikes as well to keep things lively. Inside the F-16, things are pretty impressive. The cockpit is well-rendered and detailed, and a lot of effort has gone into reproducing the instrumentation. This is where B2B excels like no other. The radar modes and various instruments are modeled better than any I have ever seen, with more nuances and greater accuracy than we have any reason to expect. This is a model cockpit for any jet sim. In the air, the attention to realism continues, with good modeling of the effects of altitude, drag, and handling, and a realistic flight envelope. And, no, I haven't flown a real F-16, but the consensus on the Net and in the flight sim community is that this is a solid flight model. So far, B2B is a winner. But problems start once you get down to actually working all that equipment. The manual for such a staggeringly complex set of instruments is obscenely inadequate. Unless you already know the cockpit from reading or previous games, you'll have a hard time using all those fancy radar modes. The entire manual, in fact, is so woefully insufficient for a sim of this type that it's almost unusable. Beyond this, we begin to get into other problems. Graphics are mediocre at best, with the seams of the ground terrain actually showing as you fly over it. Much of the action takes place so high in the air that many will feel graphics are unimportant. (That's a matter of opinion.) More of an issue is the five-plus minutes (and I'm being generous here) it often takes to load those mediocre graphics. That's not just annoying, it's appalling. Missions often start midair, hardly realistic for such a sim. There are no wingmen to control: it's you against the world, another strike against realism. And there's no head-to-head mode at all. That's a long list of flaws for a sim that boasts it's for the hard-core market and comes with a steep $69 list price. Some of these, such as the manual, are fatal failures that will keep any but the most flight-savvy sim enthusiasts away. With such a beautifully executed suite of avionics and such careful recreation of the handling properties of the F-16, it's a shame that the rest of Back to Baghdad couldn't be equally impressive."

Back to Baghdad Cheats

Back to Baghdad Image Gallery

Back to Baghdad - Box Artwork Rear 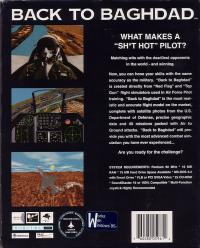 Back to Baghdad Comments

No comments have been posted about Back to Baghdad.