Beyond The Black Hole

DOS Games » B Games » Beyond The Black Hole

About Beyond The Black Hole

Review 1: A somewhat different game and I would say it is a mix between Space Invaders a game link Pong. I think that because you control two bars – one on each side of the screen and you have a ball you have to shoot back and forward while trying to hit different things in the middle of the game screen. This is not easy at all as you can also turn the ball around so it goes back to the bar you have just hit it with. You can turn around with a single mouse click but remember not to do it too close to your bar as you will otherwise not have enough time to react and it will then go past you. When you hit the ball it often goes up into the air so you have to click the mouse button as it then dives. This way you can hit the different things and that way complete the level. Although I probably didn’t give it that much time to learn it I must say that the game is quite difficult and you don’t just start the game and complete the level within 2 minutes. Other things such as fuel for the bars are also included but I didn’t really get the point with this feature though. A bit boring graphics but at least nice and easy controls makes Beyond the Black Hole a game many people will not notice and while the gameplay is unique there are many other games in this arcade/action genes that I would much rather play. But if you want to play a different game with its own unique game engine this game is worth checking out. Note that the game actually came with 3-D glasses (the tinted kind, not the red and blue ones) to give it a bit of a third dimension. That's why the gameplay seems a bit weird (thanks to Michelle Yeung for the info).

Review 2: A pretty unique game at first reminding a bit of Breakout, Arkanoid or something like that. Well, but after a while you notice that it is just different. Basically the idea is to shoot all those things in the middle of the screen with a ball. You control the paddles at the sides of the screen and can push the ball towards the middle (yup it's 3D...) by pressing the fire-button. At first this seems to be an easy thing, but the levels are all different variations of that idea. Sometimes you even get an extra ball vor shooting one of the bells, bubbles, balls - whatever. I have to admit that I got a bit frustrated since the game is not THAT easy overall, but I played it for a while and it is really an interesting crossover between the action and the puzzle genre. In the end I gave up when I had to shoot ducks that didn't disappeared but just moved when you hit them. Um... shame on me ;) I'm sure you'll do better there...

Review 3: Beyond The Black Hole is a decent cross between Pong and Arkanoid. Your goal is to use two paddles to make a rotating orb hit objects in the middle of the screen. The game is 3D although it may not look like it at first ;) Although Beyond The Black Hole looks like a standard Pong variant, the fact that it’s really an action/puzzle hybrid becomes clear after you pass the first few levels. Each of the level is laid out as puzzles, requiring you to hit objects in the correct order. This makes the game more difficult than it seems – in fact far too difficult at the higher levels to be fun.

Beyond The Black Hole Image Gallery 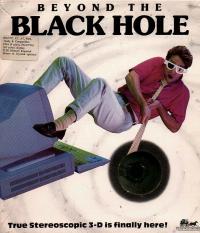 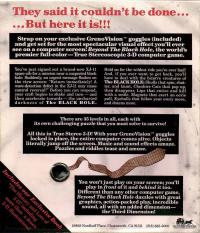 Beyond The Black Hole HTML Art

Enter the code to download Beyond The Black Hole.

Beyond The Black Hole Comments

No comments have been posted about Beyond The Black Hole.