This is an adventure made by Microprose during the Golden Age. When it was released in 1994, it was one of the first cyberpunk games for PC, predated only by Neuromancer. The game itself is a mix of adventure and RPG, and like Sierra’s Quest for Glory series, the RPG part plays an important role. BloodNetstarts by generating the main character, Ransom Stark. The character-generation phase significantly influences the game's plot, which can be quite varied. Unfortunately, the game's diversity is also one of its biggest flaws, since the in-game time is rather important. This means if you miss something because you're not at a certain location in time, you miss it for good, so save often. The story revolves around your main character in the New York of 2094. He has been bitten by a vampire and will become one of them if he does not do anything about it soon. Only a chip in his head slows down the process for a few days. The graphics are quite good for the time, the backgrounds are rendered and characters are nicely drawn. Like the graphics, the music is dark and suits the game’s atmosphere well. The interface is quite different from the other games of the era, but it’s logical and easy to use. If you are a fan of cyberpunk games, you don’t get frustrated quickly, and have lots of free time (the game is huge and if you get the feel of it, you will play on and on), this will be one of your all-time favorites. If you don’t qualify for any of the statements above, try it also, because this is not your average adventure game. 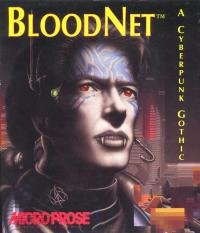 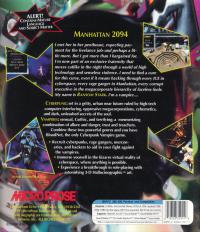 No comments have been posted about BloodNet.