Review 1: Captive is a science-fiction RPG. You have been unjustly sentenced to some hundreds of years in prison in artificial sleep. When you awake, you manage to take control of four robots located somewhere in the galaxy. Your task is to lead this robots through several planets and space stations to finally find your prison (and save the world and stuff like that of course). The gameplay is a bit like "Dungeon Master gone Sci-fi", the game is basically an ordinary dungeon-crawl, but you can equip your robots with lots of scientific gizmos.

Review 2: A big sci-fi hit on the Amiga and Atari ST that went unnoticed on the PC, Captiveis one of the best sci-fi RPGs ever.. on par with Karl Buiter's Hard Novain epic scope and refined gameplay but with a more cumbersome interface. As an innocent unfairly sentenced to 250 years in cryosleep, you must escape, recruit crew members, and (naturally) save the world. Lots of novel features, e.g. scientific gadgets that you can equip (similar to chips in Circuit's Edge), and the ability to allocate experience points among attributes make this a great RPG. The fact that it is designed by Anthony Crowther, designer of many Commodore 64 classics, should also entice traditional RPG lovers to check this out :) Recommended! 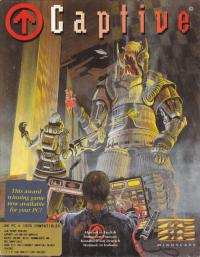 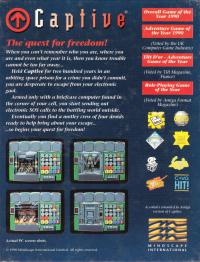 No comments have been posted about Captive.