A fun game based on oldie TV game show Play Your Cards Right, Card Sharks combines amusing surveys with a lot of luck to create a lively and entertaining half-hour. To gain control of the gameboard, contestants must predict how many of 100 people surveyed answered a question in a particular way. The questions themselves are often humorous: 'We asked 100 policemen: "If a naked female ran past you, would you be able to remember her face?" How many said yes, they would be able to recognise her face?' The opponents then predict whether the actual number is higher or lower than that selected by the first pair. The couple who get closer to the right answer then move along a row of playing cards by predicting whether the next card will be higher or lower than the previous one. The first pair to win two games out of three go on to play the final round, which involves the same higher/lower concept but with a cash wager at the turn of each card. The game show lends itself to computer version quite well, perhaps due to the combination of luck and skill which keep the replay value high. Softie's computer version unfortunately doesn't stand the test of time too well, not least because of its poor CGA-only graphics that could have been a lot better. Still, the questions are as hilarious as the show, and there are hundreds of them in the game. Recommended for fans of the TV original, but anyone who just wants a good trivia game may want to pass. 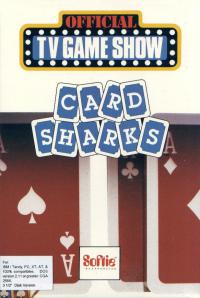 No comments have been posted about Card Sharks.