is an excellent simulation that almost perfectly captures the excitement (and aggravation) of war by combining action and straetegic elements with revolutionary 3D wireframe graphics. Put in command of a futuristic aircraft carrier replete with landing vehicles, your mission is simple: find and kill your counterpart, an enemy carrier of even greater power than your own. During the game you must capture islands, build a logistic network that will keep you supplied with the equipment and reinforcements. It is obvious that Carrier Command isn't just a game but is a labor of love-- the amount of options at your command is staggering, with numerous icon-controlled screens, viewpoints, and area maps. Best of all, these options never confuse but rather enhance the game's variety and eminent playability. You'll pilot aircraft, drive amphibious vehicles, and deplot various weapon systems. Although strategic elements are limited, they add a lot of depth and playability: you must predict which island your opponent will go after next, and plan your course to intercept him. You also must be quick on setting priorities for your repair crews when damage arises (which are realistically depicted on your carrier graphics) that can cripple your critical systems. With a unique blend of action, strategy, and simulation, Carrier Command will please both action gamers who want an adrenaline-filled simulation, and hardcore wargamers who want a break from dryer wargames. You can even choose between "Action" and "Strategy" mode depending on how much strategy you want to handle. Highly recommended. Too bad the sequel Battle Command is much inferior to this classic.

Effect: Invulnerability
When:During the Game
How:Pause the game and type THE BEST IS YET TO BE. Then press on the numeric keypad. 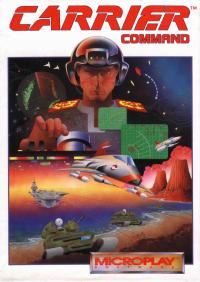