First in a hit series that is still going strong on the Nintendo 64, Castlevania is the first and only entry that was ported to the PC. The plot is standard kill-the-Dracula fare, but what the game lacks in plot innovation, it makes up for in spades in the sheer playability, ingenious level design, and a LOT of great atmosphere. Although the graphics in this PC version is far inferior to the NES classic, and the wonderfully eerie music is missing, the wonderful level design and very addictive gameplay are still here to glue PC gamers to the screen for hours on end. While most other platform games feature "typical" weapons such as the rifle, and standard go-to-the-right-forever-and-climb-some-ladders level design, Castlevania gives you a cool Indiana Jones-style whip that is useful for more than plain monster-kiling. The levels are very expansive, and navigable in more than one direction: sometimes you will be walking left, then up the ladder, then over the chasm (using your trusty whip to swing from ceiling hooks), then to the right, then inside the doors and so on. This makes navigating the levels very "realistic" -- the first three levels comprise one castle, then you are tossed into the dungeons, from where you finally emerge to enter the second castle, where you are greeted by Frankenstein himself at the entrance. In addition to great level design that is never repetitive, another hallmark of Castlevania is the numerous famous undead who stand in your way, each with his (its?) own attack style. As end-level bosses, they are extremely difficult to defeat. Frankenstein, for example, is not only very tough, but comes with his helper, little Igor who jumps around throwing fireballs at you. Dracula himself is one of the toughest bosses you'll ever find in an action game, and it'll take you a good part of the hour (if not *days*) to defeat him. All in all, Castlevania is simply a must-have for every action gamer. The lack of NES' graphics and great soundtrack is more than made up for by the brilliant gameplay. Just make sure you have a high tolerance for frustration, because you'll definitely need it. This is a game that inspired countless clones and spawned numerous sequels, although none of them was ported to the PC. Highly recommended! 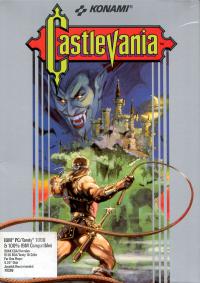 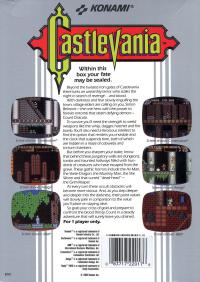 No comments have been posted about Castlevania.