Undoubtedly the strangest and most complete conversion of all DOOM engine licensees, Chex Quest was a free CD-ROM action game released by General Mills on a CD stuffed free into boxes of Chex Cereals. This promotion lasted only for half a year before it was discontinued. (Okay, so the game isn't really "freeware," since you do need to buy cereal to play it... but hey, I'm sure everyone loves Chex cereal anyway ;)) DoomWorld gave the following great review of this old game that I'd like to quote here in full: Chex Quest, a game made specifically for distribution with specially marked packages of Chex cereal about half a year ago, accomplishes its primary mission of plugging Chex cereal through countless wall decals and carefully located billboards, but also does so with a sense of its own silliness. The general plot? You are a giant piece of cereal. Your mission is to kill a wide variety of strange, green soggy creatures known as "Flemoids," probably ex-Chex pieces which were transported through the Milk Dimension and came back mutated and dripping. You have numerous super-powerful weapons at your disposal, all with vomit-inducing names like the "Zorcher," the "Rapid Zorcher," and the ultra-powerful "Phasing Zorcher." With these weapons, you are able to return the Flemoids to their home dimension -- that's right, you don't kill anything in Chex Quest, everything disappears in a flash of light, and with a strange sparkly noise. It's Doom, but you don't kill anything. It's probably the strangest thing you'll ever see. Well, you're probably asking, how does Chex Quest play? Suprisingly well, actually. The only major problem was a nasty bug upon startup, easily remedied by simply using Boom as the .EXE of choice. Given its kiddie nature, Chex Quest is, not surprisingly, quite easy. Only the trooper, sargeant, imp, and demon's alter egos make an appearance, except for a lone Baron of Hell at the end which is meant to be easily disposed, given a nearby BFG (known in this world as the Laz Device). Demo gods and Hell Revealed veterans will find this a walk in the park, but keep in mind that those same demo gods' 5-year-old cousins have to have a fair chance too. Can't you just see little Johnny Donner picking up a Powerfork? Since Chex Quest was packaged in boxes of cereal, it's also a true total conversion. Absolutely no standard Doom textures, flats, or other assorted graphics rear their heads. This makes the levels have a completely different feel, as everything you see -- the textures, the monsters, the weapons -- are new. The replacements for the rocket launcher and plasma rifle are especially inspiring. The sounds are completely novel as well, but of less important; expect lots of strange gurgles, whistles, and chimes. They work within the context, but are of little consequence. In the end, Chex Quest is one of the most novel total conversions around. Forget the fact that it has about as little product placement as Disneyland. It's a fun escape into a world where gore is goo and Total Kills is zero. Now excuse me, I'm off to return some more Flemoids." 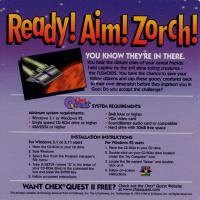 No comments have been posted about Chex Quest.