Review 1: As the name says it, this is a game based on a TV show – Concentration. Your goal is to flip the cards with the same word on it then guess the puzzle. The first part of the game is very easy, but guessing the puzzle sentence is very hard sometimes. Fun game for one or two players.

Review 2: One of the better game show conversions for PC that Softie produced, Classic Concentration succeeds in capturing the excitement of the Alex Trebek classic TV show. In this wonderfully original game, the goal is to solve the rebus that lies beneath 30 numbered panels (a rebus is a puzzle in which words are represented by combinations of pictures and individual letters). Two contestants face off, each taking a turn at control of the game board. On a turn, a contestant selects two panels, revealing a prize under each. If the two prizes match, the portion of the rebus that lies beneath is revealed. The contestant may solve the rebus, if he can, or may continue by selecting two more panels. A player loses control of the board to his opponent whenever the two panels he chooses reveal prizes that do not match. Control passes back and forth between the two players until one solves the rebus. The computer version features hundreds of puzzles spanning a range of subjects, and a user-friendly interface. Although the graphics is only CGA, they are adequate for the game, and pictures in the rebuses (rebii?) are easy to see. The sequel, Classic Concentration 2nd Edition, features the same interface with even more puzzles to solve. If you are a fan of the show, these two games are must-haves. If you've never seen the show, here's your chance to experience one of the most original game shows ever made that are no longer in production. 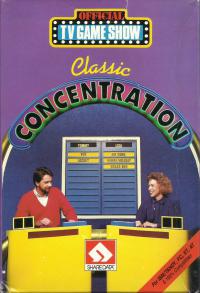 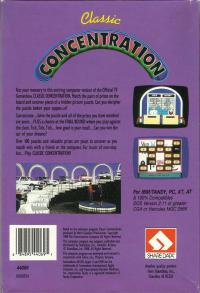 No comments have been posted about Classic Concentration.