Clue Master Detective A decent, but dull, computerized version of a popular Parker Brothers board game of the same name, Clue Master Detective is based on the Master Detective version of Clue that was first released in England. It is different from the original Clue (or Cluedo) in that this version offers 12 rooms instead of 9, 4 new suspects, and 2 new weapons. The only real differences in game play is that there are now "snoop spaces" which allow players to look at any one of another player's cards. Also, when making suggestions, players don't have to stop after one of the suggested cards is shown to them. Play continues, so it is possible to be shown all three suspected cards in one turn. This makes the game much easier than the original Clue. Clue Master Detective the computer game plays exactly like the board game, with the same premise. Dr. Black is found dead, and the object of the game is to discover who killed him, what weapon he/she used, and where he is killed. Each turn, you must move from room to room to make your enquiries. Once inside a room, make a "suggestion" on your turn by calling a character and a weapon into the room. You can then question your fellow players as, one by one, you ask them to reveal if they have a card that matches the room you're in or the character and weapon you've named in your suggestion. Your turn ends when one of these is matched by another player's card. Keep note of your findings and carry on playing. By clever deduction, you'll eventually be ready to make an accusation. The only appeal that Clue Master Detective may have to fans of the board game is the fact that you can play against the computer if nobody is around (although up to 10 people can play the game together in hot-seat mode). The game does record notes for you though, which is a plus. Unfortunately, the AI is pretty bad, and you can't change the difficulty level to make the game more challenging. As it stands, Clue Master Detective is recommended only to die-hard fans of the boardgame who want to while away some time while they wait for friends to play the next boardgame session. 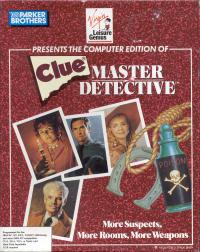 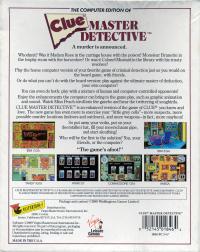 No comments have been posted about Clue- Master Detective.