is a very disappointing flight sim from Psygnosis - perhaps a good proof that the company should stick to what they do best: addictive action games. The review at Games Domain elaborate on why the game will not appeal to fans of either flight sim or action genre: "[The game] suffers from a lack of realism and a high level of frustration of control. The fun seems to have been overlooked as well. The different "areas" in the game (like the training and single mission areas) don't offer as much as their names would suggest. The training, for example, is nothing but a bunch of sample scenarios. There is no real explanation or teaching that occurs during training. The campaign in the game is one (and only one) based on Desert Storm, and missions are flown with either of the F-14 or F/A-18 aircraft. The single missions, surprisingly enough, seem to be exclusively devoted to air-to-ground missions. This essentially renders the F-14 virtually useless in these missions, and sure enough, the F/A-18 was the assigned aircraft for each of several single missions I tried. The manual does make reference to being able to use the F-14 in an escort role in these missions, but it doesn't say how, and I was never able to figure it out...I must admit that I doubt that it is even possible to have a choice of planes in the single missions, speaking from the experience of my own trial-and-error. Realism is poor in just about every respect. The flight model is horrible...in fact, I cannot with conscience even call it that. The plane's movements through the air more resemble those of a toboggan than of a jet. Initiating a bank to turn results in a strange sort of yawing/sliding motion, and airspeed bleeds extremely quickly in that attitude without even a millimeter of backward movement on the control stick. Suffice it to say that the "flight models" of games like Wing Commander or Magic Carpet would have more right to the label. Enemy artificial intelligence is not only poor: as of this writing I was still trying to find evidence of brain activity at all. Enemies quite regularly crash into terrain without any prodding, and in fact one of the few challenges in the game is to go into Instant Action and try to kill all the enemies with your own weapons before they find the wrong side of down and drive into the turf themselves. Quite the challenge! Once again, although many of the game's features look potentially good on paper, in reality this particular whole is not as great as the sum of its parts, and the parts themselves are nothing to write home about. All in all, this is easily the worst flight simulator of any kind I have ever played and it certainly ranks among my all-time worst games overall as well. The box bills it as a "unique combat simulator" with "a heavy payload to deliver for serious flight sim fans everywhere". Nothing, unfortunately, could be further from the truth. Lack of sound, dated graphics, pathetic realism and exceedingly bad gameplay make this a very poor software buy and a sure disappointment for any flight sim fan. With the industry on the verge of what could be greatest and (potentially most exciting) number of flight simulator releases in its history, there can't be more reason to avoid Combat Air Patrol like the plague and find a more worthy candidate for your gaming dollars." 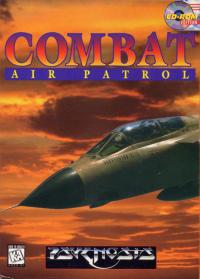 No comments have been posted about Combat Air Patrol.