Review 1: Not much to say about this game, as it been added per request from the forum. Made right after the movie kicked-in (and the movie really could not live up to success of Who Framed...), the game puts you directly in the boots of Frank Harris, detective of the imaginary cartoon world. Your mission, predictable enough (if you watched movie) to fight your way through crime waves of cartoon world and stop sexy Holli Would from entering the real world. In my humble opinion, despite cast with Kim Bassinger and Brad Pitt, the game Cool World prevails over movie, as sad as it is.

Review 2: Cool World is a lackluster platform game based on the equally lackluster follow-up movie to Who Framed Roger Rabbit?. In this cartoon world, you are Frank Harris, a detective hired to stop busty cartoon diva Holli Would from entering the real world. The game consists of four worlds with four levels each. Each world features its own obstacles, cartoon enemies, and backgrounds. Along the way, you will shoot doodles (yes, doodles) and collect coins to bribe your way to the next level. The doodles are quite fun to watch: they are moving objects from the real world into cool world, and the more doodles that make it through to the real world, the more objects they will be able to push back to cool world. The danger bar at the bottom of the screen shows the number of doodles in the real world. When the bar is full, the imbalance is far too great – and it’s game over. You destroy the doodles by shooting and sucking them up with your handy pen, return the objects to the real world—all under a pretty strict time limit. Overall, funky cartoon graphics makes Cool World fun for a while, until the challenge becomes too repetitive and the doodles all too similar. I also found the game more difficult than average, so if your reflexes are not up to scratch or you hate time limits, stay away from this game. When all is said and done, Silent Software/Disney’s game based on Who Framed Roger Rabbit is better and more varied than this rare old game. 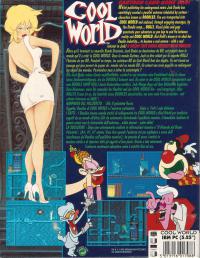 No comments have been posted about Cool World.