About Crusader- No Remorse

Crusader: No Remorse Definitely one of the best action games ever made, Origin's Crusader: No Remorse is a perfect use of the 3D isometric engine used in the abysmal Ultima VIII: Pagan. The premise is not original, but effective in the game's action-packed context: you are a former Silencer, an elite soldier working for the World Economic Consortium, who one day decided to join the Resistance, a movement which aims to free the world from the Consortium's oppression. Despite this cliche premise, No Remorse gets better with time as the plot thickens and the gameworld is fleshed out in great detail, complete with competent acting in full-motion video (which, obviously, are too large to be included in this CD-rip. Track down the full version!) Gameplay comprises of 16 missions which must be completed in order. Mission objectives range from destroying a Consortium refinery, rescuing prisoners, to kidnapping a Consortium official. Although you will spend most of your time blasting anything that moves, wanton destruction is not encouraged, since there are useful objects such footlockers which contain power-ups and ammo, as well as computer terminals that yield passwords and clues you will need. Moreover, stealth and planning are encouraged by the presence of alarms, which will call enemy troops to your location and deactivate some crucial terminals if you set them off. This, together with the inclusion of many interactive items on each level, adds a fun element of realism to the standard find-blue-key-to-unlock-blue-door gameplay. The arsenal of weapons you will have at your disposal is impressive, ranging from the mundane (semiautomatic pistols), to the devastating (UV-9 ultraviolet rifle). Part of the fun in No Remorse is seeing your enemies die in various ways. The "Unifier" plasma rifle, for example, completely disintegrates a human target, leaving only some residue. Other inventory items include mines, explosives, spider bombs, shield generators, medikits, power cells, etc. The variety of the weaponry and their different uses definitely sets No Remorse apart from Doom clones, and part of the fun lies in figuring out the optimal use for each item. Overall, No Remorse provides exactly what the title implies: addictive hours of fun without remorse. My only gripe is that the controls take some getting used to, with different keystrokes for walking, running, rolling, crouching, shooting, etc. The combination of mouse and keypad seems to work best, but this requires considerable practice. But no matter-- practice you will, and as soon as you get used to the controls, you'll find yourself hooked in the Silencer's world for hours on end. Highly recommended! 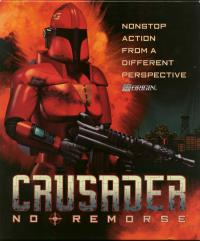 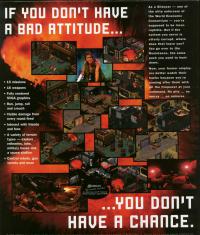 No comments have been posted about Crusader- No Remorse.