Matthew Murray's short review of this underrated Infocom game: "An adventure game with an objective much different than that of typical adventure games, Cutthroats was a treasure hunt of a unique sort, as the treasure was beneath the waves. While most of the game did take place on dry land, there was quite a bit of plot, and a lot of color in the locales that made the game, and the characters it involved very believable. Though the dive for the treasure was exciting, it was certainly not the focus of the game, and not the most memorable part. While not one of Infocom's best games, it is still entertaining to play, and as it offers two shipwrecks (the divings of which are the only difference, as the rest of the plot remains the same), the game is somewhat replayable. Good if you enjoy real-life treasure hunts that are more "close-to-home" and present day than Infidel (though it is not as hard), Cutthroats is worth playing." Not one of Infocom's best games, but still a much better release than most other commercial IF games of that era.

Effect: Battle Tactics
When:During game
How:When battling at sea, attack your opponents sails with Chain shot. (Without a sail, the ship becomes less mobile.) Once the sails are tattered,
switch to Grapeshot and pound the deck. (This will slay most of the crew.) After a few strikes, sail alongside the ship and issue the grapple order
to begin boarding. 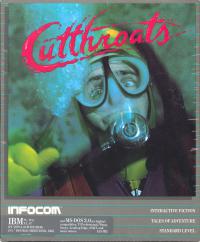 No comments have been posted about Cutthroats.