Raven-Games.com posted such a great review of this old game, packed with interesting background and insider information, that I'd like to quote in its entirety here: "CyClones was begun in February of 1994, marking the beginning of a new period for Raven [Software]. Coming off of a good relationship with Electronic Arts, which produced both Black Crypt and ShadowCaster, Raven split into two groups. One which worked with id's brand new Doom engine to create "Mage", a fantasy action game, which would eventually evolve into the game Heretic. The other team started on a project that was to use the engine from ShadowCaster to create a futuristic shooter for Strategic Simulations (SSI), called CyClones. The name CyClones referred to Cybernetic Clones, the minions of aliens who had ravaged and devastated the earth. The player was cast as the cybernetic warrior Havoc who, in the course of his battle against the aliens, discovers that he himself is one of these monstrosities, reprogrammed by his masters to do their bidding. The game was in first person 3D, as was most other Raven games, so reusing the ShadowCaster engine and its tools was a natural choice. But within a short time, the team found that they wanted to do more with the game and engine than they had done before. A new, 100% in-house engine was created that could handle moving platforms, catwalks, sloped areas, and transparent textures. The engine, by Carl Stika, was nicknamed STEAM. CyClones had a unique mouse control system, where movement could be handled independently of aiming, and any area could be targeted on screen. The gun was controlled by a crosshair, which was also used for picking up objects and manipulating world objects like doors and switches. While this setup for keyboard-and-mouse control was unusual for a shooter, its method of using the mouse to scan left and right, up and down predated the now-vogue concept of mouse-looking in an action game. It brought many to find this to be an extremely intuitive and preferential method of control, and stand by it to this day. CyClones' production cycle was at the height of multimedia madness. Sometime during the development of the game it was decided that for a competitive edge, CyClones would become "a multimedia extravaganza". A small budget was granted for full-motion video sequences to be created for the game, to be presented between missions as briefings. However, while the production company that was hired certainly did the best that was possible within such small constraints, the video that was placed in the final game was noted by one reviewer to be so horribly bad that "it makes Clutch Cargo look like Masterpiece Theatre". It was generally agreed that the lesser-distributed floppy disk version without the live video proved superior to the "multimedia enhanced" edition. Raven still jealously guards the original videotape containing the full 30-minute version of the video production, stating that the 8 minutes that were used in the final game were "amazingly, far better than the stuff that wasn't used". Perhaps folks should be thankful that the full contents of this tape were not unleashed. However, this minor quirk in the overall game did not make for poor reactions from the press. While the game was not a blockbuster title, reviewers found it to be a competent and engaging shooter. CyClones was released in November of 1994, a game created from the ground up in nine months, technology and all. This is a feat almost unheard of in the game development world. The inclusion of the unique controls and brandishing Raven's traditionally great art made for a good solid production, and an enjoyable game." 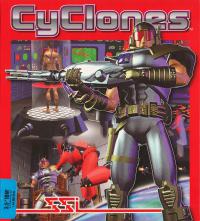 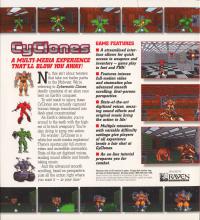 No comments have been posted about CyClones.