Review 1: You play the role of a young hero who's quest is to avenge his family's death and gets caught up in more than he ever bargained for. Greyor, a menacing wizard who seems invincible is using his magic to slowly conquer the continents. He must be stopped and you must use both your sword and your wits as you gradually gather the medallion pieces that will put an end to his tyranny. Explore a vast world and plunder deadly dungeons. Interact with many people and gather the clues that will help you defeat Greyor. This is a game for everyone, from the first-timer to the hearty gamer. The experienced will find the game a refreshing return to the classic days of dragon warrior, Zelda, and the original Final Fantasies and Ultimas that had changed the way we viewed CRPGs for many years thereafter. The new gamer will find an easy way to get caught up in a wonderful genre of computer gaming. This is an amateur-made game, thus there is no rating system. It contains some cartoon blood, not very real looking, and very, very rare use of obscenities. It is most likely appropriate for all ages if they are responsible enough to use a PC, but use discretion if necessary. So if you don't mind the simple graphics that most look like a children cartoon drawn game and the few character feature and statistics Dark Ages can be a good choice because of the ease of use and somewhat good but simple, and classic, story.

Review 2: Dark Ages is one of the earliest shareware platformers published by Apogee, and one that is among their worst. The plot: you are the prince and heir to the land's greatest kingdom. Garth, a wizard of immense power and greed, banished you as a child to far away while he ran the kingdom with an iron hand. Needless to say, you have grown into a master fighter, and has now returned to your kingdom to defeat Garth and claim your birthright to the throne. The game, like numerous other Apogee titles, is a side-scrolling platform action game. The difference between Dark Ages and Apogee classics such as the Commander Keen series, however, is that it is much more boring, easy, and very short. It will probably take an average gamer 2-3 hours at most to beat the game; veteran gamers will definitely be able to finish it in under an hour. Lackluster EGA graphics and choppy animations don’t make it better, either. A very disappointing game in all aspects ... I would have given this a Real Dog tag if not for the one redeeming fact that controls are simple and easy to pick up. Thumbs down for this one. 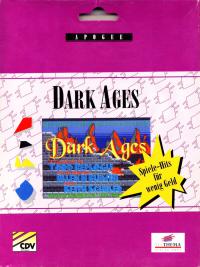 No comments have been posted about Dark Ages.