Review 1: Dark Legions might be published by SSI but it's obvious that they didn't produce this game themselves. The game is so much different than any of their other roleplay and strategy games (Fantasy Empires does look a bit familiar with some of the game sequences). And the units you control could be taking from a game like Darksun. You start the game by either using the quick start function or setting up a game yourself. You can also choose from several different battles all offering their own start of the battle. The actual game is quite easy to get started with since you simply move your units towards the enemy units and when two units meet the battle starts. Similar to the combat engine as seen in Darksun you move your unit around (though in real time and turn based) and depending on who you control you can use different kind of attacks. It's very important that you know the exact controls when you reach this part of the game as you will otherwise lose very fast since this part of the game is more action based than strategy based. The graphics in Dark Legions are quite detailed and there are several different units you can have including wizards, orcs, fire elementals, warriors and much more. The game map is divided up in squares so you can see exactly how long you can move your different units as well. If you are a fan of the fantasy genre and like simple strategy game Dark Legions is recommended.

Review 2: Oh, this is a good game that we have here, undoubtely, but let's go on with order. Dark Legions is a mix beetween strategy and action, you have your army of monsters and heroes, and must face an enemy army similar to yours, your goal: the enemy "Orb", a sphere of enormous power. When you start a game, you will be able to manually build your army from scratchs, and equip them with various items of power, like Rings of Might and such... the choice is wide, and the strategies are endless: are you the "crush'em all" type? then you will prefer an army of demons or minotaurs; are you the clever type? then you will probably use Shapeshifters. The game itself is divided into two main sections, the bigger one remembers a sort of chess table, and you move your army as you would move your piecies in a chess game... but when your army meets the enemy army, then everything changes, and you have an action game, where your goal is to beat, shot, cut down the enemy, based on what creature you have. Overall a good game, with good graphics but monotonous songs, and a very original mix of strategy and action.

Review 3: The last game Silicon Knights produced for SSI is reminiscent of SSI's own Archon and Archon Ultra, but with even better gameplay and more strategic options. Command a fantasy army and lead them to victory won by discovering and capturing the opponent's "orb." Dark Legions is an excellent game where terrain truly affect battle results, with lots of cool units and spells. A heavy dose of arcade reflexes required in close combat is the only downside.

Review 4: Fantasy players will love this strategy game. Controlling your army of elementals, mages, shadows, warriors and other mystical beings, you have to capture an enemy org while defending your own. An excellent selection of troops and spells make this game very enjoyable and fun to play. Make sure to download the manual since it is required to pass the copy protection. 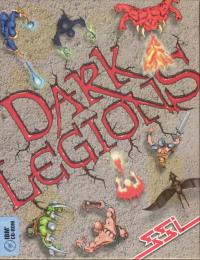 No comments have been posted about Dark Legions.