One of the very best RPGs ever produced, and definitely the BEST historical RPG ever, Darklands was unfortunately plagued with a slew of bugs when it was first released, many of which could critically damage system files. The newest version (7.0) corrects most of these bugs and makes the game what it was supposed to be, but by then a lot of people have already given up trying.... making this game the first and only RPG from Microprose. So what makes Darklands so special? For one thing, it is arguably the most accurate historical RPG ever created-- almost every facet of genuine medieval Germany is depicted in the game, from the huge map with over 90 cities, calendar system and currency... down to different weapon and armor types and their corresponding weights and effectiveness. Mundane spellcasting in conventional RPGs is here replaced with an excellent (and, of course, authentic) alchemy interface which lets you create just about any potion you want with dozens of ingredients. Different potions require different levels of expertise - the most difficult ones may require a prayer to the applicable saint to make their manufacture feasible.You can also pray to the gods to request divine aid in sticky situations. Darklands' character generation is one of the best I have seen in an RPG. After choosing your name and gender, you then go on to select your hereditary, which effects your stats and skills. You then pick an occupation which adds 5 years to your age and increases your skills depending on the occupation chosen. You can keep choosing more careers, but your character will start to suffer from age. This trade-off between experience and strength strikes a great balance that requires strategic planning. The goal of your adventures is simply to become famous. The game is very non-linear: over time, different "quests" will be spawned. Different personages will ask you go to various places and perform various favors for them. The rewards for these quests are usually financial, but often serve to improve your party's fame as well. Some of the quests that you might undertake are: kill a raubritter (German robber baron), kill a dragon, stop the problems with "knockers" in the mines, and drive out witches. You might be asked to retrieve relics, or retrieve stolen papers. Eventually, you will probably take on the Templar knights, and their demon lord, Baphomet. Each time you complete one of these tasks, you will gain more "fame," which is quantified with a number. A very successful party could expect a fame in the high hundreds. In a controversial move, Darklands has no "ending" per se-- after you vanquish Baphomet, you will be treated to a small victory screen, and be given the option to keep on playing. Which really shouldn't bother anyone, as the game contains so many optional subquests that you are likely to miss quite a few along the way. If I can't convince you to play this one, perhaps this will: Darklands has never left my hard drive since I first installed it in 1992. If you're looking for a great but overlooked RPG that will provide dozens, if not hundreds, hours of enjoyment and educational value besides, this is a must-have. 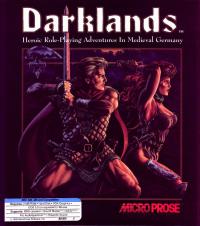 No comments have been posted about Darklands.