Defender of the Crown

About Defender of the Crown

Review 1: One of the most famous games ever made. I don't think that there's a serious gameplayer that never heard about DOTC. The story is simple - English king was killed, and 6 lords, both Norman and Saxon, are fighting for the crown. Choose one of them and conquer others with the help of Robin Hood! The game includes sieges, ground battles... True masterpiece by Cinemaware.

Review 2: One of the greatest and most popular games, which has also managed to be popular on several different game platforms including the Commodore 64, Amiga and PC. You start the game by selecting from a group of different powerful people living in Great Britain. You then have to conquer all the enemies' lands as well as the current abandoned lands. There are several different things included in the game and they will be explained below. Of course the combat is a huge factor in the game. When you attack an enemy army it's showing the battle in text format and calculating the losses for each army. This is done fairly good calculated on how many men you have in your army. When a castle is attacked you also have to hit down the castle walls with a catapult. The more you destroy the easier it will get afterwards. Finally sword fighting is included when you either have to free a person or capture your upcoming pride. This is probably the best part of the game as the atmosphere and graphics in this part of the game is very well done. Finally you also have to collect taxes from the lands you own and you are very dependant on this as you can buy new armies for the gold you collect from this. Several minor features are included and one of the better ones is that you can meet up with Robin Hood and also convince him to help you when you attack the enemy. This can result in that the enemy will have less men which helps you in the end. Overall the graphics are quite detailed although it doesn't mean that they are good looking but at least it's always easy to navigate around in the game. Defender of the Crown is a bit difficult game so I recommend you give it some time, as you will most likely find it good once you have learned the basics in it. Note that this is the CGA version and isn't really recommended unless you have a computer that can only view CGA graphics.

Review 3: You find yourself back in the time of Robin Hood and are one of 4 landlords trying to unite the country. Defender of the Crown is surely a classical Strategy-Game. Challenging and involving. It doesn't only concentrate on the strategical aspect, but also on some action, like fencing or jousting. Hold tournaments, where you can fight for a piece of land or simply invade it. Also some diplomatical aspects in it. Overall still one of my favorite games of this genre. This game set standards and it's style dominated the strategy-genre for many years, take a look at games like Kingmaker for example, though that one lacks the action-aspects. The atmosphere and historical background of this game remained unbeaten for a long time. This is the original release of the game - it's in CGA... so basically, it is pretty ugly. An EGA version of this game was released a year later and the better graphics surely add to the gameplay. Compared to other CGA games the graphics of Defender of the Crown are definitely above standard. But that's pretty much it. Please note that the sound of either version belongs to the VERY annoying sort. And I haven't found a way to disable it.

Review 4: Defender of The Crown is unquestionably Cinemaware's best game, and one of the best Amiga games ever released (although the PC version offers no less gameplay, it pales in comparison to the vibrant graphics and amazing soundtrack of the Amiga version). What makes this game a classic is the masterful blend of action, adventure, and strategy game elements. The basic object is to take over all of medieval Britain by capturing the home castle of each leader. You do this with a campaign army made up of soldiers, knights, and catapults. Besides fighting other armies and taking over their castles, you can also conduct raids and participate in jousts, which can be played either for fame or for land. In a raid, you can raid a rivals castle for gold, or if the chance arrives, rescue a saxon maiden who will become your wife. If there is any criticism that can be levelled against this excellent game, it is that the action elements are sometimes too difficult-- jousting experienced opponents can be a chore, as can the side-scrolling sword fights that take place during the raid or maiden rescue. Aside from this minor complaint, Defender of The Crown is one of the most atmospheric and truly cinematic games you'll likely find. As with all other Cinemaware games, beautifully drawn intermissions and cutscenes are included. This is the rarer EGA version of the game released by Mirrorsoft which puts it on par with the Commodore 64 version, with vibrant graphics and the same gameplay that we all know and love.

Defender of the Crown Image Gallery 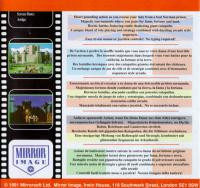 Defender of the Crown HTML Art

Enter the code to download Defender of the Crown.

Defender of the Crown Comments

No comments have been posted about Defender of the Crown.