It's one hell of a good idea, this game! You might have seen a destruction derby or a destruction race in your life, but to the ones who haven't, I'll explain the idea. There are a few ways of driving, but the most obvious differences is "bowl driving" and "track driving", track driving is just riding down a small track and bowl driving is one big circle with the border as its only boundary. Destruction driving, as the name will tell, has few rules. You can drive against time, against players or against destruction. Destruction is most fun, it means you will be driving down the track or in the bowl and the only thing that really counts is earning as many points as you can by crashing other players' cars and keeping your car from destruction. At the track there's also a lap limit, so points and place will decide who has won the race. It's fun to play and the commentary gives it the extra kick. The commentary reminds me a bit of Monstertruck Madness, however, this is an all different type of game though... I recommend this one, especially if you've never played it! 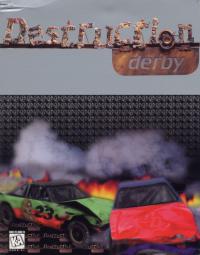 No comments have been posted about Destruction Derby.