Dive Bomber is one of the least known World War 2 simulations ever made, even though it was marketed by (then) UK giant US Golf and ported quite competently by Epyx to the US. Perhaps one reason for the game's relative anonymity is the heavy arcade feel that disappoints die-hard armchair pilots, while lacking nonstop, physics-free action to please joystick experts. Maury Markowitz has all the scoop in his excellent review for MobyGames: "The game is an interesting idea, a single mission flight simulator where you fly an Avenger off the Ark Royal (Royal Navy) in order to hunt down the Bismarck. The Bismarck is "out there somewhere" and you have to find her, while at the same time protecting the Ark Royal from both submarines and minefields. Loose the Ark Royal and it's over. Some parts of the game are a lot of fun. The plane pretty much flew itself (no real physics, somewhat arcadish in that you could only roll so much and fly so high etc.) so you spent the majority of the game in the map finding targets, and then flying over them while in the gunner positions. For instance the Ark Royal started off headed right into a mine field, so you aim for that, jump into the lower gun position, and fire away. Lots of fun! Getting the U-boats was similar, but very hard to do, you typically flew past before getting enough rounds into them. Countering you were guns on the subs, represented by flashes which I suppose were supposed to be the AA. I never found them to be a big issue though, and the flashes made it easy to find the boats. More dangerous though were the Me-110 night fighters which travelled in packs. Although you could (unrealistically) take out a pack or two in the upper gun, get caught too much and down you go. Fuel and ammo needed to be watched, and when you got low you flew into the area of the Ark and hit "I" to tell her to turn on the lights. It also lined up with you every time (for developer ease I believe), making this task pretty easy as long as you remember to lower the hook and wheels. When you do finally find the Bismarck you get one shot with your torpedo to sink her, no second try. The bad: one try to sink the Bismarck! The game just ends at that point, you miss or you hit, all done. Also the history is astoundingly bad. The manual goes to great lengths to explain that the Avenger never flew with the RN and this is just a game after all, but in reality Avengers really did fly with the RN! Then consider that the Avenger was a torpedo bomber, not a dive bomber. Pick up a book! As a hard-core simmer I found the flight portion of the game to be pretty distracting, but as an action game this isn't an issue. The bottom line: [Dive Bomber is an] interesting idea and the graphics were definitely well done for the time, but once you get the Bismarck once or twice the game pretty much has no replay value." 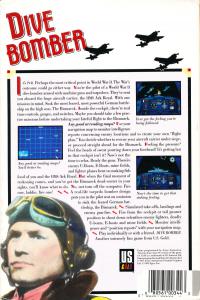 No comments have been posted about Dive Bomber.