Double Dare is a solid computer version of the not-so-well-known TV gameshow hosted by Alex Trebek. TV trivia buffs might be interested to know that this was Trebek's *first* gameshow, long before rising to stardom with Jeopardy!. Another interesting anecdote is that this is the gameshow that inspired Nickelodeon's Double Dare Deluge, the most successful gameshow for kids in the whole history of broadcasting. Gameplay will be instantly familiar to fans of Jeopardy! ... well, except the tedious egg-throwing beginning, in which you must throw eggs into the cardboard clown's mouth to win starting $10 and first question. After that silly reflexes-intensive bit, though, the game settles into a typical trivia game, in which you must pick the right answer to Alex' question from 3 multiple choices. As the name of the game implies, you can "dare" the opposing team to answer the question, in which case they will win twice the amount of money if they answer correctly. When you dare your opponents, they have a chance to double dare you back, in which case the stake is doubled once more, to four times the original amount. As in the original gameshow, most questions are very interesting and even educational, spanning a wide range of subjects from historical trivia to astronomy. With hundreds of questions, adequate graphics, and a good interface, this PC version of Double Dare is a great game for all fans of the show, or anyone who's interested in the roots of Jeopardy!. The game, by the way, is much more playable than GameTek's Win, Lose, or Draw which was released in the same year. Highly recommended! 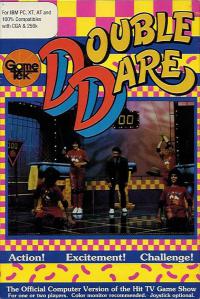 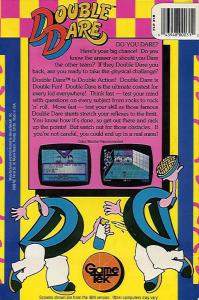 No comments have been posted about Double Dare.