One of the most obscure strategy/action hybrids of all time, Eco Phantoms is an ambitious mix of action and strategy that does neither well. Detailed description and review from MobyGames: "After six years away from Earth, your delivery contract is finally over, you've been paid a fat cheque and you can't wait to get home. As your ship gets closer and closer to the old beloved blue planet, the anticipation mounts. But wait! What's this? The earth is an unfamiliar, grey husk! A vast alien mothership hangs above it, mercilessly sucking out all of its natural resources. While you were away, the Eco Phantoms arrived, and did this! Now, you've managed to steal an Eco zeppelin craft and have gone down to Earth, to try to reverse the planet-draining process before it's too late. The Eco Phantoms have built several domes on the planet's surface, which house their buildings and equipment. You'll have to navigate through three of these domes, learning how to operate and maintain your alien craft, gathering resources, collecting data spheres, rescuing prisoners and engaging in confrontations with the Eco forces. Eventually, if you survive long enough, you'll be able to enter the alien mothership, where you will have to reprogram the main computer, to reverse the process and restore Earth to life. Eco Phantoms is a game that I really want to love. It's got great graphics, lots of atmosphere, a unique interface and 'feel' to the alien ship you're piloting, and the designers have obviously tried to create something really special. But... ...when it comes down to it, the game just doesn't play that well. Or, at least, I don't think so. It's too difficult, too fiddly and just not rewarding enough. Most of the time, you're flying along gulleys in a traditional Eye Of The Beholder style, flick-screen way (albeit quite nicely done). Mapping out the maze on graph paper is pretty much essential. Every so often, you'll encounter something... an enemy scout ship that you must give the appropriate clearance code to, in order to pass (This involves the code creator, an often used device in the game, and one that I don't particularly like), or a bunch of ships that attack you for no particular reason, swooping down quickly and blasting at you (an irritating, and too difficult, action sequence). Progress involves going to various buildings. Each building has a computer inside that will give you the code to enter the next building. Go through enough buildings and you get to the next level. The section inside buildings is a rather poor arcade game, with you controlling a small robot, blasting enemy spheres before they touch you, going around, picking up supplies, and trying to locate the code computer, then setting explosives (when you find the right place to put them), and getting out of there. After all that, there's another annoying action sequence where you have to blast away at the outside of the building, while it's shooting back at you, and try to locate its 'weak spot'. I found most action-based parts of the game to be lacking in enjoyment, and generally too difficult. The rest of the game involves exploring, trying to find 'data spheres', that are hidden around (You need a complete set, to complete the game) and managing your ship's resources (giving food and water to crew, keeping the engine oiled...that kind of thing). But I can't help feeling that this game is complex for the sake of it...Most of the different gameplay elements have a 'bolted-on' kind of feeling, and tasks that should be quite simple are complicated by over-fiddly procedures. Lots of things you have to do don't really add to the game, they just act as minor irritations. Add to this the fact the manual (while generally quite in-depth) just glosses over some things, leaving you confused about exactly why or how you should be doing something... I really like what the designers were trying to do, and the graphical style is great, but the bottom line is: I didn't find this game particularly fun, or interesting. It's a real shame, because I think, with some different design decisions, this could've been a classic. But hey, this is just my opinion! If you (like me) are intrigued by this title, and can ever lay your hands on a copy, then try it for yourself...Who knows? It might work for you. At the very least, congratulations to Splinter Vision for making something different." 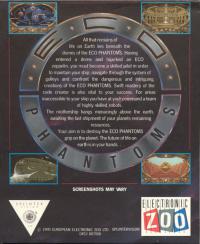 Electric Crayon 3.0- Super Mario Bros & Friends- When I Grow Up