Review 1: Fantasy jump'n run well-suited for fans of the genre. Also features some simple adventuring elements such as picking up objects and "using" them on characters that come by your way. Technically very nice, enjoyable gameplay and overall Elf doesn't take itself too seriously. Case in point: the evil guy in the game is called "Necrilous the Not-Very-Nice"... hehe =) Not easy to get to run on modern PCs, but works fine on my old 486. So good luck, I hope it will work on your machine. ;)

Review 2: You take the part of Cornelius the Elf (hence the title) who must rescue his beloved Elisa from the clutches of the said Necrilous-The-Not-So-Nice. Just by the first look at the name of the bad guy you know you can expect some good laughs. And you might get just that! Elf is a platform game with some adventure elements. The creatures you meet on screen are divided into two type: Goodies (rabbits, gnomes etc.) and Baddies (soldiers and monsters). Killing Baddies is good and will boost your score and energy but killing Goodies will cause a Boo! or a Hiss! to appear on screen and will effect your end of game rating. Cornelius is armed with just a ring, which fires energy bolts and must interact and trade with the various people he meets along the way in order to progress. Progressing is mostly just a matter of, for example, picking up some birdseed, giving it to a bird, picking up a feather from it, giving that to an Indian, who gives you something else, etc. That is about as difficult as the puzzles get. Overall, Elf is a standard platformer but there are a lot of neat scenarios, the graphics and sound are very good and - it's very enjoyable to play! It's not terribly difficult but it should keep you occupied for a while. You might even come back to it - definitely worth a look. 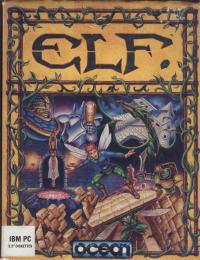 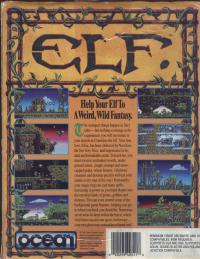 No comments have been posted about Elf.