Review 1: You are being sent out to defeat the mighty Wizard Krill. You, an apprentice - merely to be called magician. You only know 3 spells - why you? Why not another mighty wizard? It seems like Krill would detect another one of his power too easily. Too soon. You will need all your skill and intelligence to fulfill your mission. The storytellers of Infocom managed again to create this intense athmosphere and packed it into their powerful parser. You can count on many hours of gameplay. This one is not easy, but still challenging, while not being as hard as for example Hitchhiker's Guide to the Galaxy.

Review 2: Enchanter is the first entry in the Enchanter Trilogy, a series set in the Zork universe, except casting you as a magic user than a clueless adventurer. The premise is typical fantasy fare: you are a novice enchanter sent to Krill's castle to save the world from his evil plans. Your start out with a handful of not-so-powerful spells in your spellbook, but as you progress you will acquire more powerful spells which you can copy into your spellbook for later use. Similar to AD&D RPGs, you will need to memorize spells before you can cast them. This is a bit cumbersome, but once you get used to it, it becomes second nature. Enchanter has all the charm of Zork games, although it (and the entire trilogy) is decidedly much more serious and less whimsical. Almost all puzzles require appropriate use of spells. None of these is particularly difficult - you can solve most of them by simply trying out all the spells in your repertoire. This makes the game a good introduction to the much harder sequels (Sorcerer and Spellbreaker). As you can expect from an Infocom game, the writing is excellent and the parser powerful enough to understand a wide range of synonyms and sentence structures. One thing I particularly like is how location descriptions change as Krill's destructive spells spread across the landscape. This corresponds to a time limit you have to accomplish your mission (although that time limit is so generous that you should be able to finish the game with plenty of time to spare. Part of the fun in Enchanter lies in reading the game's often funny responses when you cast spells on the wrong objects. True to Infocom's tradition, there are numerous tailored responses that show an amazing level of attention to detail. Although it is a more serious game than Zork series, Enchanter does have a few hilarious moments. My favorite is the encounter with the "adventurer," a bumbling fool who looks like the player (i.e. you) in Zork game, who will make you chuckle with his funny antics. Even with the banal plot and easy puzzles, Enchanter is a fun game, thanks to atmospheric writing and interesting spells. The only nitpick I have is that the game forces you to deal with "realistic" conditions like thirst or hunger - a nuisance that doesn't add anything to gameplay. Otherwise, Enchanter is a good game that marks a good start to the trilogy. 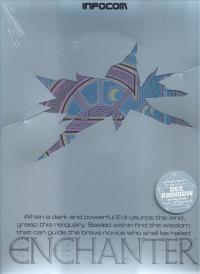 No comments have been posted about Enchanter.