Ah, here's a decent platformer game for PC. Fluid animation, and Whooo... girl in skimpy clothes . There're few things I really really hated about Entity. First, why is it so hard just to perform vertical shoot? and d'uh, why can't I shoot the smaller T-Rex?. Your character (in skimpy clothes) is a well-endowed earthling female who was abducted by aliens and awoke to find herself clad in a scant high-tech latex and sent to fight a horde of dinosaurs, for purposes that aren't obvious until the end. Overall, Entity is a decent platformer, but i'm quite annoyed by the fact it's so hard even to perform simple task such as vertical shooting and by the fact I kept get bitten by verocious small T-Rex's and there's nothing I can do to kill them! 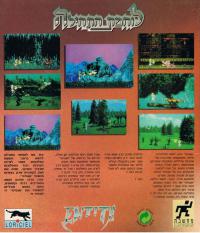 No comments have been posted about Entity.