If you’ve ever watched daytime television in the US, chances are you’ve run across a game show called Family Feud. It pits teams of five family members against one another trying to guess the most popular answers to a series of innocuous questions which are based on survey results (similar to Card Sharks). The family playing the board is given up to three incorrect guesses to match all of the survey's responses. Points are awarded based on the number of people who responded with each answer. The excitement peaks when the family with most points selects two members of the family to play a fast money game against the clock. Softie's computer version is quite faithful to the original show, although replay value is questionable because I always seem to get the same questions each time. The excitement of seeing family members help each other on the show is, naturally, missing in the computer version, but with hundreds of questions and fun endgame, Family Feud will keep trivia fans happy. Fans of the TV original will probably be disappointed, though. In 1989 Softie released a sequel, All New Family Feud, which features (very ugly) extended EGA graphics but many more questions than the first game. 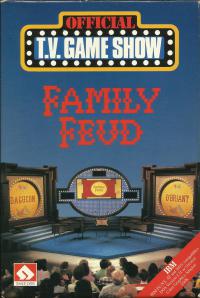 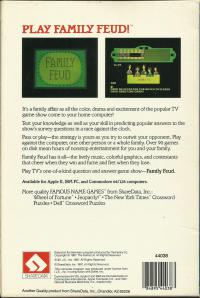 No comments have been posted about Family Feud.