is, thank goodness, the last game in Coktel / Tomahawk's short-lived line of risque, mature-themed adventures that began with Emmanuelle. Aside from its eye-catching "mature" label, the game is a rather mundane story about a business man who has invented a chemical drug that increases the sex-drive. Unfortunately he was assasinated, and you accidentally get hold of the drug sample. Your mission, naturally, is to try to deliver the sample to the right person and avoid being made out as the murderer. For starter, you play a woman in this game-- a fact that won't make any Roberta Williams fans raise eyebrows, but in this case it seems as if the designer made the choice only as an excuse to flaunt mildly erotic, useless scenes such as you taking a shower. Another big problem is that you can't do much that's not related to the story, and there's no going back, so if you forget to snap a paper in the hotel, you have to restore an old save. This is made worse by the fact that some puzzles are not very logical, and it can takes hours to find the solutions. Apart from these gripes, Fascination is a good murder mystery, with interesting plot and some good puzzles. Beware of pixel-hunting, and save your game often if you want to finish this quirky game. 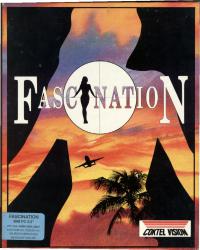 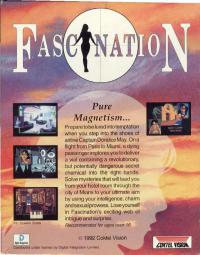 No comments have been posted about Fascination.