Review 1: Excellent action/adventure hybrid from Vivid that was much more popular on the Amiga than PC, First Samurai has a thin background story of a young apprentice warrior who follows the Demon King, (the game's main villain who murdered his master) through time itself. The game sees our hero battling through four-way scrolling 2D levels, fighting various monsters while trying to solve the puzzles and to find the level exit. His final goal is to catch the murderer and then revenge the untimely and unjustified death of his master. In the beginning of the game, you are magically transported to the close proximity of a "regeneration pot". These pots are scattered around the level and serve as restart points. You can activate any pot you find by storing some Mystical Energy (ME) into it. These pots serve as "save points" and also to quickly move the hero between different parts of the level. You collect ME from monsters you kill, and after collecting enough ME on the first level, you will get a samurai sword. Lose enough ME from enemy attacks, however, and you will lose the sword. The neat trick is that the lost sword transforms some ME into much needed physical energy - allowing you to survive and continue the fight with bare hands. The game has a fairly sedate pace which means the main character slowly walks around the level disposing of all sorts of enemies ranging from monsters to other warriors. The main focus in the game are the fiendish puzzles which must be solved before moving on. The puzzles and levels are varied and well designed. There are secret rooms to find, plenty of magical items to use and additional armament to collect. Magic plays a significant part in solving puzzles. The magic items can be picked up only if enough ME is collected. These items can be used to overcome some otherwise inpenetrable areas like walls of fire, rivers and other similar barriers. There's also a Wizard Mage who can be summoned in certain situations. Unlike in most arcade games, First Samurai challenges you to choose whether to fight or try to find another way around the problem. It is more of a thinking man's game than a pure action/arcade gore-fest. The fighting part is also very good, with plenty of moves and weapons that vary from level to level. Overall, First Samurai starts at a leisurely pace, but once you are drawn into its world, you will be endlessly fascinated with Vivid Image's creation. The controls take some time to get used to, but it is all worth the pain. First Samurai certainly offers an original and sometimes humorous and even educational view to the world of samurais. Highly recommended to fans of arcade and adventure games alike.

Review 2: Walk through nice 2D fields and destroy / kill a lot. The nice thing in this action platform game are the weapons you come across during the game. You start with no weapons, but your hands and feet. A long the way you pick up a nice sword and you can throw with axes and stuff. 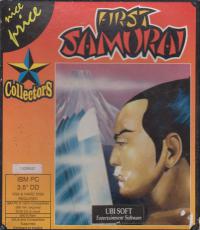 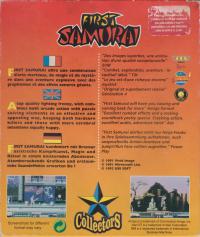 No comments have been posted about First Samurai.