Review 1: "What the hell are you thinking?! This is a democracy! We can't just let people who don't like us walk around without hassling them!" The above quote probably sums up your role in Floor 13 rather succinctly. You play the role of the director general of intelligence for the British government although on paper you're the "director of fishing and agriculture" ;) The game has a rather 'tongue in cheek' approach to the whole thing despite being averagely close to world affairs and bordering on some controversial suggestions but even the most avid Brit would probably agree that its all in good fun. As the director general you have eight different branches that you can use to sort out the various problems that arise such as surveillance, removal, searching, assault and, my favourite, interrogation. The game runs in days, you'll arrive at your office and recieve reports on various government situations, some of which you may not know the significant nature of until later on but such is the world of political espionage. If you do well, you're praised by the prime minister and may even end up working for the secret 'stone masons' like society as well as having your operation supplied with more assassins, surveillance teams and the like. If you do badly, the little bomb under your desk in your office will go off and, as the PM says, "I hope you've been taking flying lessons". There are various ways of solving each problem, some better than others, and the events are hugely randomised. While its true that you'll most probably never play the same game twice, it must be said that some of the happenings can be rather shallow and usually end with the killing or ‘disinforming’ of the target. A good example is a scenario when one of the royal family, Harry, is captured by a terrorist organisation. You have two weeks to find Harry before the press finds out. If you do a 'discrete search' of the kidnappers home, your men fail to notice a bound and gagged Prince. If you do a 'ransack search', they mysteriously notice the invisibly Harry. Besides these little issues and despite the heavily menu driven interface with a complete lack of any taste visuals (even by 1991 standards), Floor 13 is a great 'filler game'. Its the game you play while waiting on that phone call or finishing that download. Due to the lack of the rather steep learning curve, even a very good player will struggle to last for more than perhaps thirty minutes to an hour before taking flying lessons although it can be an addictive little number. Floor 13 is definitely worth a try and is good replacement from Solitaire. Although I would point out that its not for the younger generation and by no means contains an in-depth storyline (it’s all random). But give it a go. ;) Warning: this game contains controversial elements that may offend some, such as allowing you to torture prisoners to extract information. Proceed at your own risk.

Review 2: Floor 13 is a dark game where you play the Director General of a secret Government organisation which deals with the darker and more sinister sides of Government that we the public don’t usually see. You have plenty of resources at your disposal to help you do your job, which include, surveillance units, heavy assault squads, interrogation cells, Assassins and Funds for dis-information. Whenever something or someone happens that threatens the British government it falls to you to sort it out! You get called to Downing Street for a dressing down if you aren’t doing your job properly and if you continue to fail then you may just be heading out of the a window on the 13th floor! To be totally honest, the graphics aren't too bad, I mean, you can see that everything had been designed pretty well with snappish images, although the main let down, as you can see from the screenshots, is the ugly CGA appearance. It's rather ugly and comes out all pink and deranged (well it did for me), which kind of took away the feel of authenticity for me. You should be able to play the game in the modern VGA setting, although for some reason I could never get it to load up! The overall game play has been well created, and you get a real-feel of your role, which is good as games that don't have this edge just seem fake and after a little while - boring! Unfortunately there's a little bit of a let down on our behave for this title. We couldn't find any cheats for the game, an FAQ, walkthrough or even a music file. I think the reason for this is because Floor 13 is a game where every time you play it you get prompted with a different set of options and tasks throughout the game, which is probably the reason you can't cheat and why there is no walkthrough. As for the music front, I couldn't get any sound to work for me, I think it must be my own computer playing up, if so I will try and get a music sample from a friend soon. My apologies for this. Even with no music to show you, or any text files for this titles, I can still assure you it is a great game and can be pretty fun! Why not download it and give it a try eh? 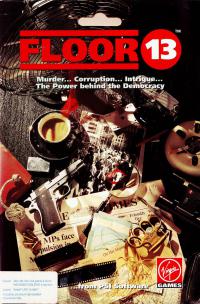 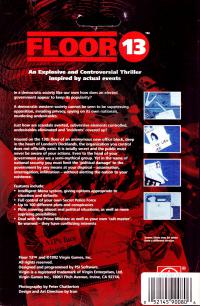 No comments have been posted about Floor 13.