About Guild Of Thieves

Successor of Commodore blockbuster The Pawn, Magnetic Scrolls' Guild of Thieves improves upon its predecessor in almost every respect, although the charming tongue-in-cheek humor of the first game is somewhat muted here by a much stronger emphasis on puzzle solving than plot development. Which is not to say that the plot in Guild of Thieves is lacking-- it is just average. The game casts you in a role of an apprentice thief who must steal an array of valuables to prove that he is worthy of an entrance into the guild of his profession. Tasks start out small-- pilfering small objects here and there-- and culminate in the robbery of the Bank of Kerovnia. Anyone who wished that The Pawn's were longer and more puzzle-intensive will have a field day with Guild of Thieves. The game serves a plethora of many, many more diabolical puzzles than The Pawn, many of which require both perfect timing and ingenuity to solve. This is definitely not a game anyone can finish in a sitting (unless you can survive days perched on a chair, eating food with one hand and typing with another). The game also offers many enhanced features, most notably the advanced parser which understands a lot more useful verbs. The "goto x" command, for example, will bring you to a location you have been before automatically by taking the shortest possible route. You do not need to draw maps anymore, unless the geometry of the landscape is crucial for solving some puzzles. Of special mention is the gradual increase in difficulty that, in a way, serves as a "tutorial" for beginners. The first treasures can be found and removed easiliy, but the difficulty of the puzzles gradually increases. Anyone who manages to rob the Bank of Kerovnia at the end can be proud with good reason. Overall, Guild of Thieves is a great game, especially if you like puzzle-intensive adventures without much attention to plot (similar to Zork). Anyone looking for a more plot-intensive game should play The Pawn and even Jinxter first and save this difficult challenge for later. 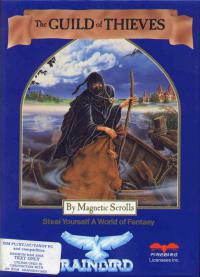 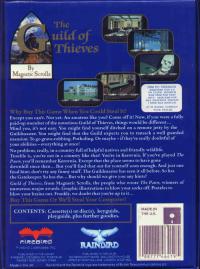 No comments have been posted about Guild Of Thieves.