Review 1: Kingmaker is yet another strategy game from Avalon Hill although this one is taking place at a different time compared to their other strategy/war games. The game takes place in England where you have succeed getting a person crowned from your faction. Of course it isn't that simple since other factions are trying this as well. If you succeed the game isn't over since you also have to keep the crown and at the same time destroy any other threat before you can rest on your victory. The game is fairly easy to get started with and with a little game testing you will get the idea of how the game engine works. The computer does offer decent competition in the game so Kingmaker isn't just a game you will win in each time you play but this is also what makes the game funny. Kingmaker offers a nicely done interface and well done pictures to any events that will occur during the game. Personally I like this since it adds a little extra to the game so you don't get tired of looking at the actual map all the time. A good strategy game not too hard for new players of this genre.

Review 2: A solid Strategy-Game this one. It's set in the war of roses and obviously you've got to care about making the one king that you support. There are several nobles that might be crowned if the "right" people are killed before - take care that the last one is on your side. VERY good - one of the best games of this genre I've ever come across. Classical Strategy - get it if you like those stuff. Somewhat like Defender of the Crown, but made better (though an original still stays an original). And of course the surroundings are different. Good to look at - the right choice for every Strategy-Gamer and could also be a good start in this genre...

Review 3: Avalon Hill's first release after long absence is a severely underrated and undersold game. Kingmaker is a wonderful PC conversion of an AH board game. Choose to be either Lancaster or York in the famed "War of the Roses" in medieval England. The goal: have your faction secure a royal heir, get him (or her) crowned King (Queen Regent), and then keep him (her) alive whilst you exterminate all the other royal pretenders. Solid AI, original premise (you can "assign" lots of titles to your vassals, and abduct several heirs apparent), and excellent music despite simplistic battle interface. 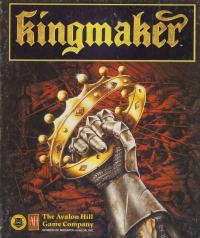 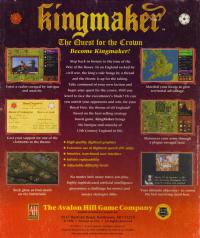 No comments have been posted about Kingmaker.