Review 1: Do you like anime? Do you like RPGs? Do you like a game that will keep you playing for hours? If you like all three, THIS is the game for you. You start out loaded: legendary sword armor, etc. As you can tell from this, this adventure will be anything but conventional. You are drunk, and a gang attacks you. You are knocked out and all your belongings are stolen. You wake up in a bar, where the bartender's daughter is being unwell fully raped. So what is a groggy, drunken hero to do? Take out the whole gang with his fists and save the girl! But wait... the thieves don't have your stuff; where is it? You can't even find your clothes! So, I guess that means you are naked. Eventually, you find an old man who gives you clothes (what a nice guy) and he notices your small "manhood" (this is an ongoing joke throughout the whole game, even monsters notice.) So now you set off to tell your friend who lent you all the stuff the bad news. It doesn't take long to notice this is a hentai game, so I was impressed to see such a great game for this type of RPG. The battles are generally easy, and it's kind of automatic if all you want to do is physically attack, but it's still fun to fight. The graphics are GREAT, though the sound could use a bit of improvement. I think it has one of the better storylines of the RPGs I have played. Overall, this is a GREAT game, and would still be great, even without the adult scenes. 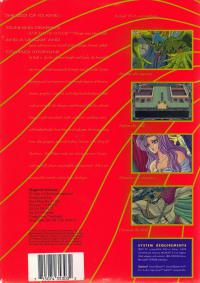 No comments have been posted about Knights of Xentar.