Lexi-Cross This hugely underrated game was also designed by one of the most underrated designers. (Peter Oliphant was responsible for many hits for Cinemaware before he joined Interplay and became one of their best programmers). This is a fun word-based futuristic gameshow where the objective is to reveal the words which are concealed under a matrix of tiles, and then solve the puzzle that the words suggest by typing in the answer before your opponent. A highly entertaining solo game that's even better in 2-player mode. Highly recommended. 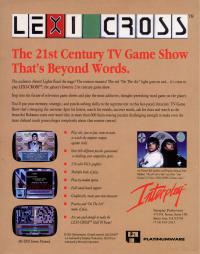 No comments have been posted about Lexi Cross.