Review 1: Mention this game to some old gamer (such as myself) and you'll notice a small, nostalgic smile on the face. Ah, the good old times... Lode Runner is...great! You control your tiny little character on a pretty big screen and make your way to the treasure chest. Once you have it you gotta exit the level and advance. Easy? Yeah, right. Download this game and enjoy it for hours to come...wait, not hours - days, months, years!

Review 2: I remember one day my mother took me with her to work. I wasn't very old at that time... One of her colleagues seated me in front of one of those black/green monitors at something that must have been an XT - it was old... even for that time. From somewhere he got a few disks (don't talk about harddisks!) and so he loaded up a few games for me to play. I ended up playing just one the whole time - Lode Runner. It's one of those simple games that can hook you for hours and hours. Your goal is to collect all the chests while avoiding the bad guys chasing you. You are able to burn holes into the ground and if one of the baddies falls down there you can simply walk over him till he manages to crawl out of it again. Once you collected all chests you only have to get out and into the next level. Simple yet ingenious concept. Every level is new and it will take you ages to complete them all. One warning before you download this one: It doesn't seem to be possible to slow this down in a way that will allow you to play this game on a modern computer. You might be able to get the game itself to the right speed, but the controls will still be... extreme. One touch and you end up on the other end of the screen before you noticed a movement. If you got an old XT standing around - perfect! Get just the right gaming food for it here!

Review 3: To describe Lode Runner as just another treasure-grabbing "action game" would be to undermine its ingenuity: suffice to say that it is arguably the world's first action game that combines puzzle elements successfully-- dexterity is required, yet at the same time your exit path (and holes to dig) must be carefully planned lest you get helplessly trapped. This game truly belongs in the rare breed of timeless classics that remain addictive no matter how old they are.

Review 4: Lode Runner is a good puzzle-meet-action game. 50 levels packed with action! I guess one reason I really love the game Jumpman was because it reminds me a lot of Lode Runner. This is your traditional climb-the-ladder game as you run around collecting boxes. You dig holes and trap the enemies which are, well, dumb enemies to put it nicely. You also dig holes to get yourself through parts of levels. You have to be careful though, because the holes do fill up, and that will trap your enemy, but it can also trap you. You can manipulate enemies (due to their stupidity to your advantage a lot, and also the holes you dig (get strategic with them ;)). Did I mention the funky level editor? Why yes, there is a level editor, and you can create your own custom levels when you’ve conquered the 50 that are included. This is a great addition to the game, making it basically never ending. The graphics were what you would expect for a 1983 game, nothing spectacular, typical CGA. You can make out everything in the screen, which is what is necessary. You can see ladders, enemies, boxes, ground and yourself. What more could you need? I haven’t experience Lode Runner with sound, but expect your typical PC speaker to rock the casbar (or drive you spare). I totally recommend you have a go at this game. It’s a classic, one of the best in its class. I have many fond memories associated with it, and it’s just a brilliant game. 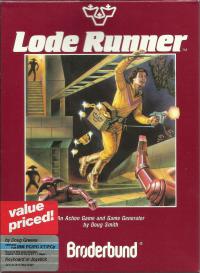 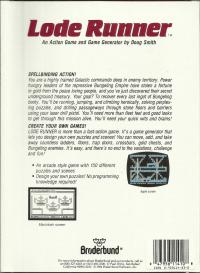 No comments have been posted about Lode Runner.