Review 1: Ah, Tex Murphy. Clearly the greatest computer based PI ever. You just can't help but like this guy. And Martian Memorandum is actually one of the better ones in the series. This is the second time we meet Murphy, he got a little famous after his first case (Mean Streets) but now work has run out. One day he receives a message from the business tycoon Marshall Alexander, whose company is working on terra forming Mars. His daughter has been kidnapped and an "object" has also been stolen. No one must know that the object is missing but Tex is not told what it is. And thus begins the investigation that will make Tex meet many strange people and go to many far off places (including Mars). This game has really nice graphics for a game from 1991 and there are even digitalized voices (!), the only troubles with these are the terrible quality. The gameplay is great and there really is a feeling of being a PI and questioning people and searching through places. The story is great too. Together with "The Pandora Directive" this is my favourite in the series and overall a game recommended not only recommended to fans of this genre but also to the average game fan.

Review 2: Sequel to cult classic Mean Streets, the second of Access' Tex Murphy games is an interesting point-and-click detective adventure set in 21st century San Francisco. As with the first game, the highlight of Martian Memorandum is the well-written premise and interesting characters. You are Tex Murphy, a (cough) handsome PI who is down on his luck. You are hired by Marshall Alexander, the owner of Terraform Corp. to find his kidnapped daughter Alexis. You will soon be looking deep into Alexander's past, dealing with thugs and conmen of all kinds in San Francisco. The case will take you to the jungle, and eventually to Mars, where Terraform is terraforming the planet. Here, you will discover what the game's title mean, and why it rests on your puny shoulders to save the Earth... again. Fans of Mean Streets rejoice-- Martian Memorandum is an unadulterated, 100% pure point-and-click adventure game with no inscrutable flight sim or action portions in sight. Some puzzles do require you to solve them within a time limit, but usually it's quite lenient (once you find WHERE all the items are, of course). The characters you meet, as in Mean Streets are interesting, and advance the game as they would in a real murder mystery novel. You can select several approaches in your conversation, ranging from friendly to threatening, and different characters require different approaches (as well as cash) to cough up the information you need. In contrast to most other adventure games, you can get irrevocably stuck if you pick the wrong approach for a character, who is so upset with you that he/she won't talk to you again. Typically, you will know when the conversation "fails" (mostly because everyone you can talk to in the game has at least one important clue), but sometimes the signs are more subtle, and you can proceed with other matters for a long time without realizing what you miss. It's a bit annoying, although not difficult to overcome if you use the tactic of "save before initiating a conversation, restore and play again to choose all possible choices." Other annoyances include extreme pixel-hunting, which requires you to slowly move the cursor all over the screen to find 1x1 objects. And-- die-hard fans take note-- there is a MAZE in this game. A big one. One that will require you to carefully map it, several times over. Fortunately, there is a way to bypass it, which makes it more bearable. There is also a very convenient built-in hint system, although the puzzles generally are quite easy. Overall, a very well written storyline as well as good graphics and (some) speech make Martian Memorandum a solid adventure. The acting is as campy as ever, but if you like Mean Streets but abhor the flight simulator/action parts, then you'll definitely love Martian Memorandum despite all its pixel-hunting nuisance. 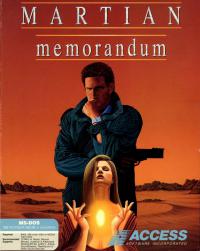 No comments have been posted about Martian Memorandum.