This is a historical game that depicts 14th century Venice as the centre of the world. You start off in this North Adriatic coastal city in the time of it's greatest power. The game has a somewhat uncommon interface. You start on the map of the world – in Venice of course, but the main menu is almost hidden. To go to the main menu you must click on the city icon and a Venice window appears. There you can interact with the city, and also find the building that lets you save or quit the game. The game works on four levels basically. You fight for the supremacy in Venice: There are four families that compete for the top position in Venice. You're one of them! In order to be successful, you need to bribe, threaten, please or get rid of your opposition. You must go to the Venice city icon to do any of this. There you can hire low-life scum (arsonist, slanderer or assassin) to burn down the opposition, bribe city councilmen in order to become the next mayor of the city, add to your prestige by supporting the fine arts, or even buy your own cardinal (have enough of those and you'll decide who's gonna be the next pope). You discover the world: You can have both sea or land units that can move around the map and discover new places. There are approximate positions of the cities already on the world map, but as I said they're not accurate. The city you look for will be near (but not on) the spot marked on the map. Remember, not all cities are located near the coast! While discovering the world you'll sometimes discover some ancient Christian artifacts (skulls of saints etc.). Trade with the world: To be successful at all the things mentioned above you need MONEY, and lots of it! As the title of the game states, your source of income is trade! Once you discover a city, you can trade commodities with it. Remember the prices and see which goods are profitable for trading. Remember, goods are always cheaper in the city they originated from than in a city where you can buy them second hand. Still, the city of origin is sometimes far, far away and even if you buy something that's expensive, you can usually sell it for an even higher price! The historical aspect: Well, me being a professor of history, I can't but to comment on this one. READ IT, as it gives out some important clues. The game tries to truly capture the historical era. It's set in a time, where the powerful merchant families from Venice controlled different courts of Europe, and even the Holy Seat of the Pope. It's the time when the plague killed about half of Europe – and they didn't forget that in the game! If you come to a city where they have the plague BE CAREFUL. You can sell your commodities for sky high prices, because other merchants are avoiding such cities, but you can also get the plague and carry it around the world. Also, be advised that the goods bought and sold are the actual goods that Venice was trading at the time, thus the best export commodity you have is the Venice glass (presented by blue cups) and the nearest city you should start trading with is Constantinople (as it was in the real history). Well, I won't bore you with other details, because this game is too cool for school! Enjoy it! 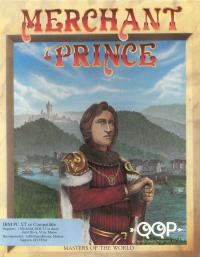 No comments have been posted about Merchant Prince.