Pac-in-Time Review 1: Basically this one is EXACTLY the same game like Fury of the Furries I am not 100% sure which one was first, but I think Mindscape bought the license later on and changed the intro and background story. The story is quickly told - Pac-Man is sent back in time into the year 1975 by his archenemy the evil witch... now he has to find a way back. The intro is really nice, the game is nice as well - but it is just... not different from Fury of the Furries - if you have one game you don't REALLY need the other, it might be interesting for collectors though.

Review 2: Probably the most unique official Pac-Man game in existence, Pac-In-Time casts Pac-Man as an Indiana Jones wannabe, sporting not only legs but leather gloves, whip, and that self-confident sneer that Indy fans know all too well. There's actually a plot this time around: we learn that Pac-Man is actually a fun-loving guy who's living happily with his family, Pac-Man and their two cute Pac-Kids. The Pac's fiendish arch enemy, the Ghost Witch, vowed to disrupt his tranquil life. So she cast a spell on Pac-Man, ripping him from his family and hurling him through time to his dangerous past. The journey back in time transformed Pac-Man into a young Pac-Boy. The Ghost Witch sent Pac to 1975, a world which has never heard of the hero Pac-Man. Through the witch's foul magic, the inhabitants of a once beautiful land have turned against him. Commanding this horde are the Ghost Witch's loyal ghosts. To escape this distorted past and return to his beloved family, Pac-Man must traverse this hazardous land and penetrate the castle. Within it stands the portal of time--Pac's only hope to return to the present. Despite the novel premise and star power of Pac-Man himself, Pac-In-Time simply isn't as fun to play as the arcade original. Basically, you have to move Pac around, collecting pellets which will open the door to the next level. You get 4 weapons to help him in each level, which may or may not be hidden in various places in the level. Controlling Pac is an exercise in frustration: he tends to slip far too easy for a hero. If he stands on a slope that's only slightly inclined, he'll start rolling down it. Also, he seems to have become a lot more buoyant, since when he lands, he'll bounce around 1 or 2 times, which makes jumping to small (sometimes moving) platforms about as much fun as insulting a rock. And to add insult to injury, much of the movement in the game is done with a retractable rope which he uses to swing around from ceilings-- a rope that defies all laws of physics. Overall, Pac-Man fans who have superhuman reflexes and infinite patience will probably enjoy Pac-In-Time. The very bad controls and high frustration level will keep others hooked on the simple, mindless fun of the original instead. 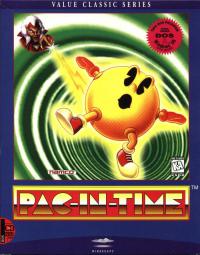 Pac In Time Box Artwork Back 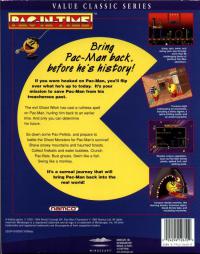 No comments have been posted about Pac In Time.