Pinball Fantasies is an excellent sequel to Pinball Dreams, featuring yet again four brand-new multi-screen tables to play on. The tables are called Party Land, Speed Devils, Billion Dollar Game Show and Stones and Bones. As the titles suggest, the tables are based on four very different themes and are at least as good as in the previous game. This PC conversion, released over a year after Digital Illusions' Amiga game, was done by Frontline Design and they've done a wonderful job! The graphics are as colourful as the AGA Amiga version and there are two screen-modes to choose from. A standard low-res VGA mode and a tweaked hi-res mode (a bit poor looking). Sounds and the fantastic music are identical, replayed by a MOD driver. And of course, the excellent gameplay is still there. Don't miss this one if you like pinball games, it's one of the best. In 1995, Digital Illusions released Pinball Illusions (again ported by Frontline Design), which topped the genre yet again. 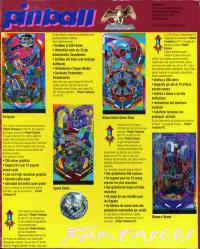 No comments have been posted about Pinball Fantasies.