About Prince Of Persia

Prince of Persia Review 1: In Prince of Persia Jaffar wants to marry the beautiful Princess, but the Sultan stands in the way of that happening. Jaffar tells the princess to marry him, and she refuses so he tells her she must say yes or she will die within 1 hour. You play the rule of the young guy trying to save the princess, and little does she know that you are the one, and that you are already in Jaffars Prisons. A challenging game, and the 1 hour time limit can be quite hard to beat, but if you do get there in time, the princess is yours!

Review 2: Prince of Persia offers a great action game and many features not seen in many other games. The overall gameplay is very unique and has since only been seen in a game like Zorro but still a more special game. The character animation is simply excellent in this game and you didn’t see any other games with the same high quality in this period. Even some of today’s games don’t have the same high quality as Prince of Persia has. The game is divided up into different levels and on your way through each level you have to avoid different traps, some more difficult than others, and also enemy fighters that you have to fight against with your sword. Most of them are fairly but there are certain ones that can cause quite some problems. The traps you will meet on your way can be everything from spikes, loose floors and different machine-like traps. Prince of Persia is a must game for all fans of the genre. The reason is that while it does quite simple gameplay at times many new things are included and is a great challenge to anyone. Good detailed, but simple, graphics are included while the little sound could have been better, especially because only very little has been made for the game. A recommended game for everyone as long as you are willing to start the game over and over because of the many tiles your character dies.

Review 3: Nice Action-Jump 'n Run - not bad, but somehow I never got into it much. Anyway - someone requested it from me and so I digged it up again. Let's say the game got potential and some people might actually like it. Technically everything is ok, no downpoints there. The atmosphere isn't what it could be... somehow I would have expected more from the name and the title-screen, but after that the graphics get a bit boring.

Review 4: Nice game. Over millions copied sold. This game wich was released in 1989 and where now the third version: Prince of Persia 3D is one of the best games ever. You can get a sword and fight other arabian guys.

Review 5: Ah, there is nothing like the feel of cold steel impaling you in rather interesting places to really get you moving. Trust me, this game has its fair share of ‘cringe moments’. You’ve got three guesses to tell me the name of the evil dude who kidnapped the princess. Grand Vizier Jaffar you say? Well, you’d be exactly right! Aladdin here we come! But no, sorry you are not Aladdin. You are trying to rescue the princess who is your love; you have an hour to get to her. If you don’t get to her in an hour, then she will be forced to marry Jaffar or be killed. I have to say that does take some skill to play this game. It is quite important that you know how to jump, otherwise you can end up either impaled on spikes or a big pile of broken bones at the bottom of a pit. They have those lovely jumps, where you have to do a flying leap and end up hanging off the edge of the other side * shudder *. There are other scary things too, like some of the floors fall in, whilst others are moving floors. There are guards placed around, and as you move up from the dungeons, the guards get harder to fight. You do nice little sword battles that take a while to get used to, thrust, dodge etc. Overall, I had some fun playing this game, even if I did always end up with a big spike impaled me. And I kind of couldn’t play it without cheating either. It’s a classic game, loved by many – give it a shot. 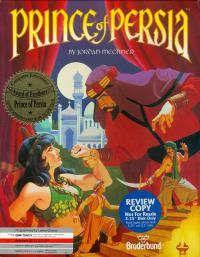 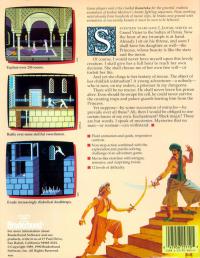 No comments have been posted about Prince Of Persia.